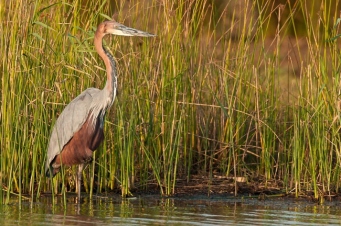 I turned off the N2, passing through the town of Mtunzini and drove to Umlalazi Nature Reserve on a last minute whim, but the rewards were well worth it! As I lay in my tent, below the massive deciduous tree, whose leafy branches split up the clear starry sky, I listened to a pair of calling African Wood Owls and to the more distant screech of Wahlberg’s Epauletted Fruit-Bats and wailing Thick-Tailed Bushbabies. To me this was the perfect way to drift to sleep.

My intentions had initially been to head north from Durban and visit the more famous Zululand reserves, which are renowned for their birding and good game viewing. It was however mid-morning and I was craving a snack and an opportunity to stretch my legs. My deviation off the N2 lead me to the Raffia Palm Forest on the outskirts of the town, where I was soon viewing a pair of adult Palm-Nut Vultures, flying together with their two youngsters and having a mid-air brawl with a pair of African Fish Eagles. 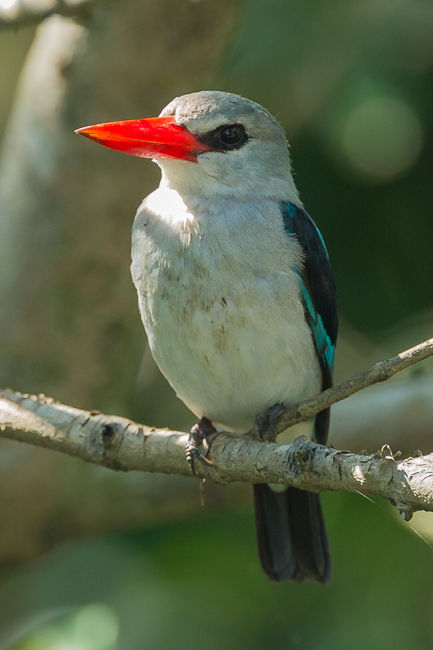 1 of 9. Umlalazi Nature Reserve is one of the best places in the country to view Mangrove Kingfishers.

With such a great introduction, I decided to spend a while longer walking amongst the raffia palms and thick coastal vegetation to see what other birds I could add to my list. Square-Tailed Drongo, Red-Fronted Tinkerbird, Black-Bellied Starling and African Paradise Flycatcher were quickly found as Red-Capped Robin-Chat called softly from the thick undergrowth and a troop of Vervet Monkeys bounced through the branches above me, chattering at an African Goshawk which made a brief and swooping appearance. The moist forest floor attracted large numbers of butterflies with the most notable being the large and dazzling Green-Veined Charaxes, Mother of Pearl Butterfly and numerous large swallowtails. Walking below the raffia palms, whose fronds where so densely packed that they blocked out the rays of the sun, I was fortunate enough to see a pair of Black-Throated Wattle-Eyes as they made repeated launches after flying insects. Eastern Olive Sunbirds also flew rapidly amongst the upper canopy and both Sombre Greenbuls and Yellow-Bellied Greenbuls were heard calling amongst the thickets. 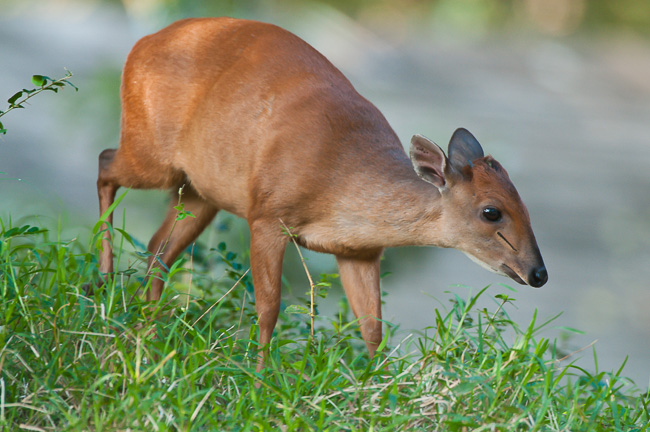 2 of 9. Red Duiker are common in the coastal forest of Umlalazi Nature Reserve.

Once back at my vehicle and with the entrance to Umlalazi Nature Reserve being close by, I decided to drive through the gates to the reserve and see what was on offer. Close to the gate, a pair of Trumpeter Hornbills sat preening one another in a dead tree whilst above them hundreds of Little Swifts wheeled and turned, constantly screaming with high pitched calls. Turning immediately left along a tar road, I crawled along at snails pace, craning my neck to see into the dense overhanging thicket. This was very soon rewarded with a Yellow-Rumped Tinkerbird, African Yellow White-Eyes and a juvenile Orange-Breasted Bush-Shrike. Next to the road a brightly colored Blood Lilly pushed up from the forest floor detritus and in the shadows small mushrooms erupted next to a decaying tree stump. The roadway soon opened up into the picnic sites alongside the lagoon, where families sat fishing and enjoying a weekend break. Scanning along the far side of the lagoon with binoculars Little Egret, White-Breasted and Reed Cormorants and African Darter were quickly ignored as I sighted a Goliath Heron that was standing motionless in the water, patiently waiting for a passing fish. The real highlight however was a Mangrove Kingfisher sitting on a torn mangrove branch. Both Pied and Giant Kingfishers sat on branches overhanging the water and along the grassy banks African Pied Wagtails walked confidingly amongst the feet of the fishermen. A small family herd of very relaxed Burchells Zebra blocked the roadway and when they eventually moved off onto the grassy verges, they were joined by a Fork-Tailed Drongo who used the animals to chase up insects that the drongo quickly snatched up. 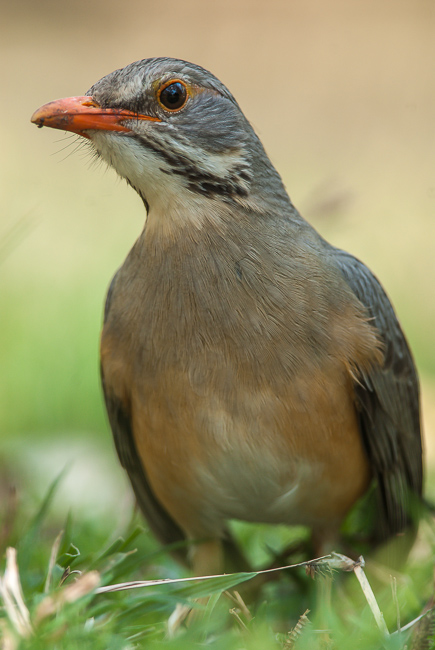 3 of 9. A Kurrichane Thrush feeds on the campsite lawn of Umlalazi Nature Reserve.

Another troop of Vervet Monkeys were found near the road and I stopped to watch as they fed on the gum oozing from acacia trees and which they were careful not to get on their fur. The troop soon left the trees and wandered over to the mangrove swamps and mud flats that were now exposed due to the low tide. Hundreds of Red-Clawed Mangrove Crabs were emerging from their burrows in the mud and were busy collecting fallen leaves and posturing to one another with their greatly enlarged pincers. The Vervets cautiously stalked and pounced upon these crabs and then sat chewing the crabs, occasionally spitting out the hard pieces of shells. Wooly-Necked Stork, Egyptian Goose, Blacksmith Lapwing and Three-Banded and Kitlitz Plovers also fed amongst the mangroves, making the most of the rich food sources that the mudflats provided. On a nearby pole Truncated Mangrove Snails sat densely packed and out of reach of the high water mark. 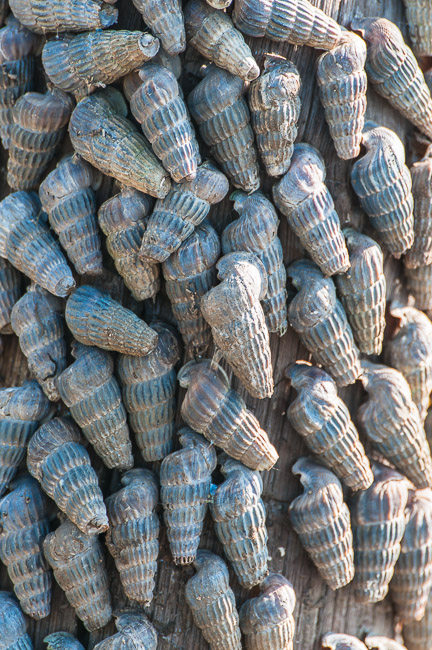 5 of 9. Umlalazi Nature Reserve has a diversity of habitats including mangroves and coastal forest

Passing through the mangroves, the vegetation changed into a small patch of acacia woodland with long densely matted grasses lying below the trees. Off in the distance a Long-Crested Eagle perched high up and both Cardinal and Bennett’s Woodpeckers drummed into dead branches. A small birding party comprising of Long-Billed Crombec’s, Yellow-Breasted and Bar-Throated Apalis’s, Black-Backed Puffbacks, Cape White-Eyes and Dark Capped Bulbuls all moved together through the trees. Tawny-Flanked Prinia’s and Zitting and Rattling Cisticolas sat on top of wavy grass stems and called, proclaiming their territories to their neighbors. Further along the track, Spectacled Weavers, Spotted Flycatchers, a Brown-Hooded Kingfisher and a Striped Kingfisher were added to my rapidly growing bird list. Returning towards the entrance gate along the same road that I entered along, I disturbed a Squacco Heron that was standing motionless up against the river bed and nearby on a small causeway a pair of Wire-Tailed Swallows rested briefly before once again taking to the air together with Black Saw-Wings to hawk insects over the lagoon. 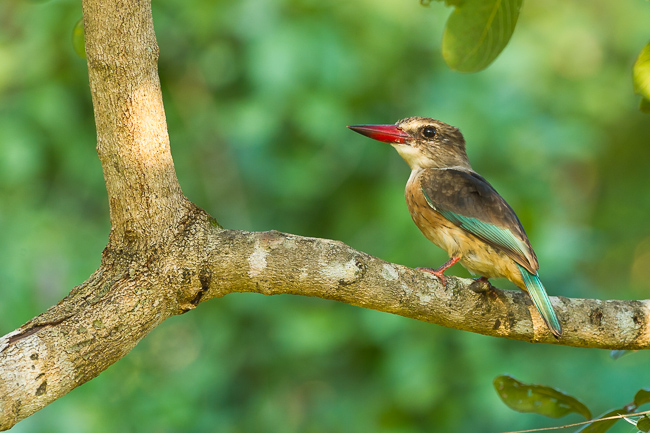 6 of 9. A Brown Hooded Kingfisher perches in the shade of a large riparian tree.

On once again reaching the entrance gate to the reserve, I turned and followed the road to the campsites and coastline. The road passed through a large reed-bed where Thick-Billed Weavers were collecting nesting material for their oven shaped nests and a pair of Hammerkop flew overhead also carrying large sticks in their beaks and which would be added to their massive nests. A pair of Burchells Coucal flapped clumsily just above the reed tops and crashed-landed into a bush where they then disappeared from view. In a large fruiting fig tree Black-Collared Barbet, flocks of Black-Bellied Starling, Black-Headed Oriole, Southern Boubou, African Dusky Flycatcher and White-Eared Barbet all fed on either the ripe fruits or on the insects that were attracted to the tree. 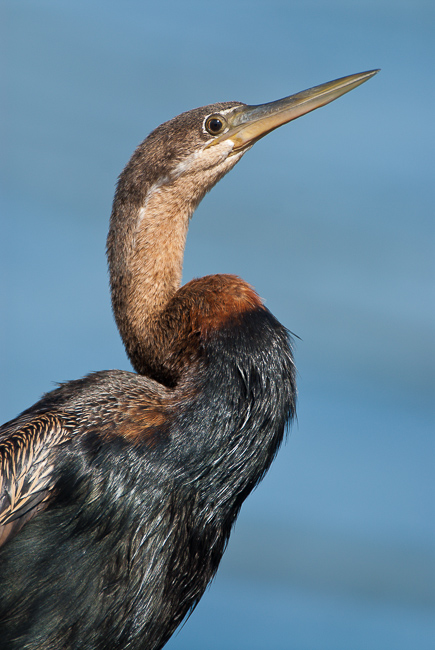 7 of 9. Darter are commonly seen sunning themselves in the dead trees that line the watercourse 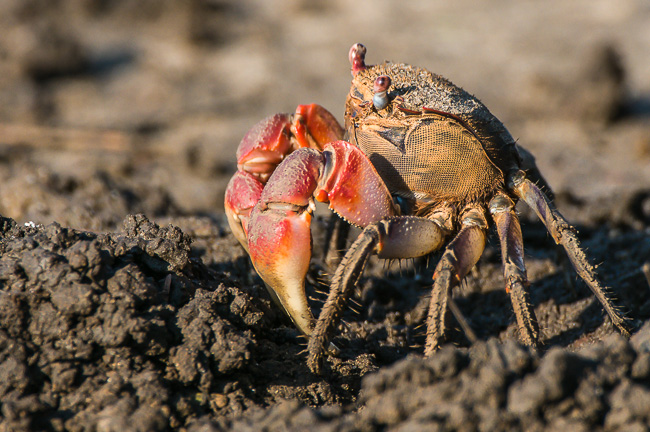 8 of 9. Red-Clawed Mangrove Crab on the mud flats of the mangrove

Passing the campsite where a small flock of Green Twinspots, Red-Eyed Doves and Cape Wagtails fed on the ground, I entered the dense coastal dune forest and watched as numerous Red Duikers and the occasional Bushbuck fed amongst the openings in the forest. Above them Purple-Crested Turacos hoped around the branches, intermittently flashing their crimson wings. The short stretch of road led down to the parking area near the beach and from where a short boardwalk took me down onto a large curving bay overlooking the deep blue Indian Ocean that crashed upon pristine beaches in long rolling waves. On the beaches Kelp and Grey-Headed Gulls and Swift Terns huddled in small groupings with heads tucked into their wings and White-Fronted Plovers scurried to and fro together with the incoming and receding waves. 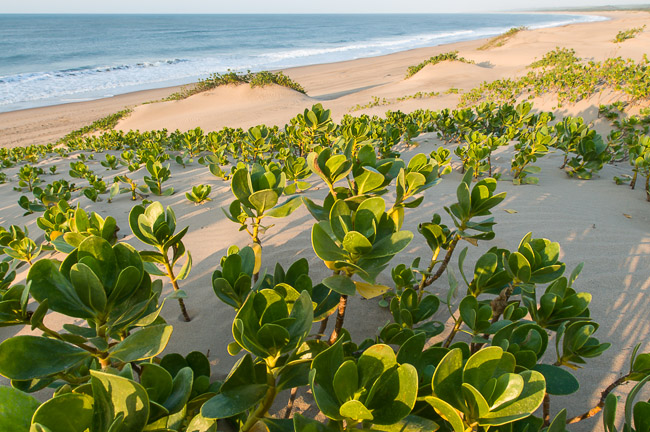 9 of 9. Extensive stretches of beach front the Umlalazi Nature Reserve.

After spending an hour reflecting the hustle and bustle of life on top of one of the sand dunes, I returned to the campsite and decided that it would be well worth setting up camp and spending a night in this small, compact but yet extremely diverse nature reserve which had presented an exciting array of bird, animal and insect life.