Being surrounded by the two of the worlds great oceans, the Indian and the Atlantic oceans, can only keep us constantly reminded of the important role that oceans play in our daily lives. The oceans face massive challenges from over-exploitation, pollution and global climate change.

In celebration of World Oceans Day, Lloyd Edwards, from The Baywatch Project, in Port Elizabeth has provided us with this snippet of news on the northern migration of the humpback whales that occurs each year.

"The first whales in the area were spotted off Seaview, Port Elizabeth last weekend and have been coming past steadily ever since. These whales, which have the longest migration of any mammal (8000km), leave their feeding grounds in the Southern Ocean and arrive near Knysna in about April. 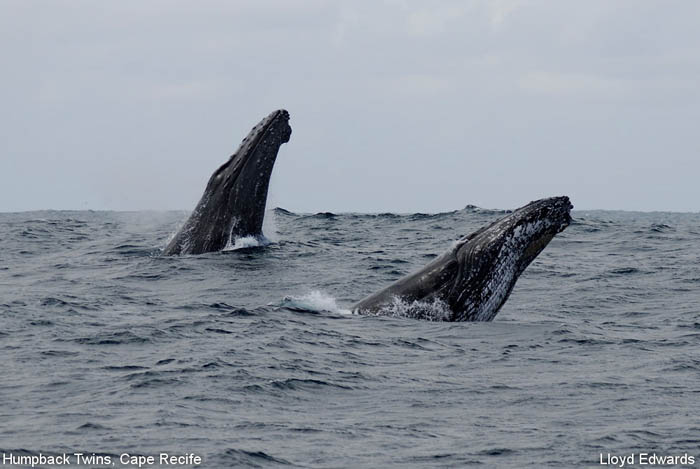 Although we had not spotted any prior to last weekend, a 6 meter sub-adult became entangled in a shark net off Kwazulu-Natal at the end of April which caught the rescue team totally by surprise. Another one became entangled on the 31st May off Durban. Both animals were safely released by the Natal Sharks Board. The whales continue coming past Algoa Bay in an easterly direction until August or September.

After giving birth and mating off East Africa the southern migration starts and continues until the second week in January. They do not feed until they return home to their summer feeding grounds. This is quite a feat for the females as they have had to endure the birth of their calves and the ensuing demand on breast milk. In mid summer these cold and nutrient rich waters are teeming with their favorite food, the Antarctic krill. They are known to double their weight during one Antarctic feeding season as they ween their calves and prepare for yet another migration.

Lloyd Edwards runs a boat based whale watching charter business called "Raggy Charters" and is busy writing a book on the marine life of Algoa bay. Read his article on the Killer Whales of Algoa Bay here