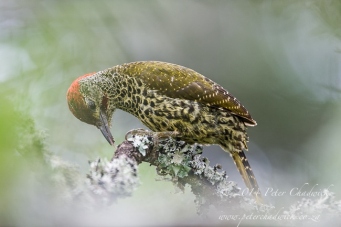 As the first faint rays of light, over a distant horizon heralded the dawn of a new day, the rush hour began with a cacophony of sound and frenetic activity. The night shift of penetrating calls of Fiery-necked Nightjars and their “Good Lord Deliver us” praises and the screeches of the resident Barn Owls gave way to Bokmakerie and Cape Robin-Chat as they heralded their territories from the tops of bushes and trees.

In the distance the African Fish Eagles iconic calls echoed through the air. Skeins of Egyptian and Spurwinged Geese flew overhead towards the vlei after a night of feeding on the farmlands neighbouring the reserve. They crossed the paths of White-breasted Cormorants, Little Egrets and Hadedahs as these birds left their overnight shelter to begin a day of foraging. 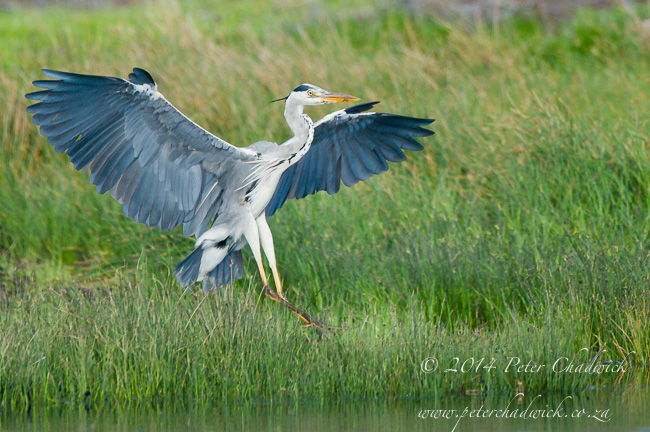 I first visited De Hoop Nature Reserve, situated in the Overberg of the southern Cape, where all this activity was taking place, as a “birding mad” teenager in the early 1980’s. I made the pilgrimage in order to try and glimpse the rare Cape Vulture, a colony of which was situated on the Potberg Mountain and which is still the only remaining colony in the Western Cape. I remember also being in awe of the impressive number and variety of species on the De Hoop vlei, never thinking at the time that I would have had the privilege of managing this incredibly diverse reserve and be able to learn its inner secrets while at the same time also discovering a wealth of rare and endangered species. 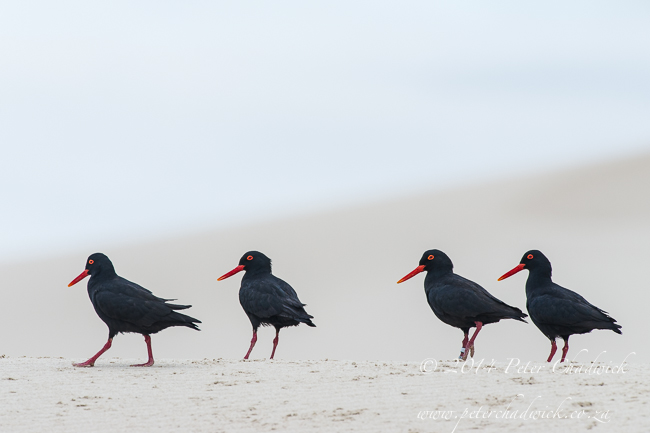 2 of 9: African Black Oystercatchers on the beach.

The Cape Vulture colony is still in existence and now numbers around 200 birds after an all time low of only 30 birds. To me this is one of the real conservation success stories, whereby an entire community has taken ownership of the colony. The vultures which range far and wide beyond the reserve boundaries rely on the farmers to leave out their dead sheep and cattle in the fields and this they willingly do, proudly advertising to all that they look after the vulture’s future. Sick vultures are immediately reported and then taken to the local vet in Bredarsdorp who also proudly nurse the birds back to health for later release at De Hoop. 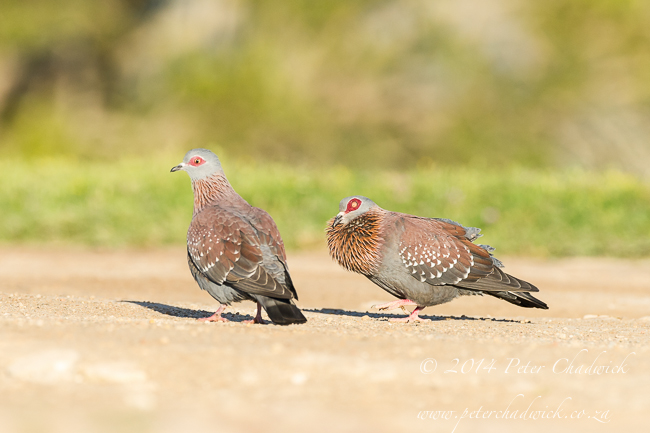 The road to De Hoop via Swellendam or Bredarsdorp traverses over rolling farmlands and the dirt roads allow you to slow your driving to a sensible bird viewing speed. The most obvious birds are the Blue Cranes that are found at the highest densities of anywhere in the country. Denham’s Bustards also occur, but are extremely shy, seldom allowing prolonged views, while the Agulhas Long-billed Lark is the mega tick of the farmlands and this drab colored bird can often be seen in the early mornings singing from fence posts.

4 of 9: Capped Wheatear in flight.

Perhaps the most obvious feature when driving through the gate and dropping over the ridge is the 16 kilometre long vlei which is a Ramsar wetland and at times contains over 30 000 birds. Great White Pelicans arrive in flocks of up to 400 strong. Caspian Terns carry out continual patrols over the vlei and in the summer months White-winged and Whiskered Terns arrive in fluctuating numbers. African Spoonbill, Great Crested, Black-necked and Little Grebes are all common along with a variety of duck species. A pair of Peregrine Falcons has specialised in hunting these water birds and aerial battles occur as the prey tries to avoid the extremely fast and agile predator.  Both Greater and Lesser Flamingoes are rare visitors when the water levels drop and they even bred here in the 1950’s when the vlei flooded its banks. 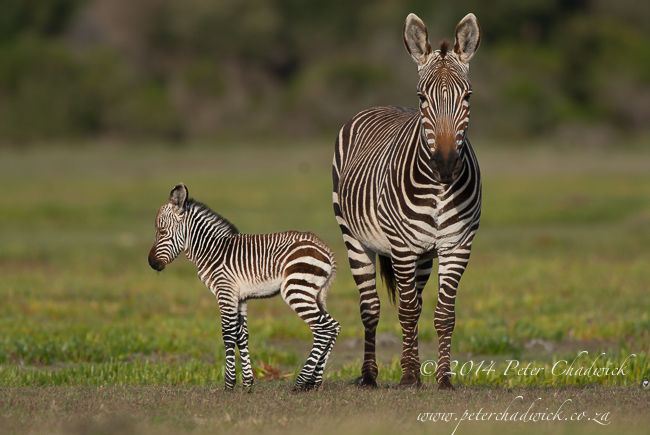 The great thing about De Hoop is that unlike many other reserves, you can get out of the vehicle at any time to follow an elusive flash of feathers that disappears into the undergrowth and one of my favourite routes is the thicket vegetation along the banks of the vlei. The vlei trail wanders for upto 14 kilometers, starting from near the camp facilities and here specials such as the Southern Tchagra and Knysna Woodpecker can be found amongst the more common Acacia Pied Barbet, Greater Honeyguide, Cape Bulbul, Southern Boubou, Long-billed Crombec and Malachite Sunbird. The rocky kranzes along the latter sections of the vlei provide nesting and roost sites for both Spotted Eagle-Owl and the rarer Cape Eagle-Owl, so be absolutely sure of your identification between these similar looking species. Rock Kestrel and White-necked Ravens also make use of the numerous ledges to breed. The return walk through the limestone fynbos and renosterveld allows close encounters with the larger residents of De Hoop, namely the Eland, Bontebok and Cape Mountain Zebras who are often closely attended by Pied and Red-winged Starlings and flocks of Cattle Egrets who all glean insects disturbed by these large animals. Cape Grassbirds, Grey-backed Cisticolas and Karoo Prinia’s all flitter amongst the shrubs and bushes and Black-headed Herons, Black Crows, Spotted Thick-knees and Greywing Francolins inhabit the more open areas. Ostrich wander throughout and during spring and summer months the males become highly protective of their crèches of young, so don’t get too close unless you are happy to test your sprinting abilities! 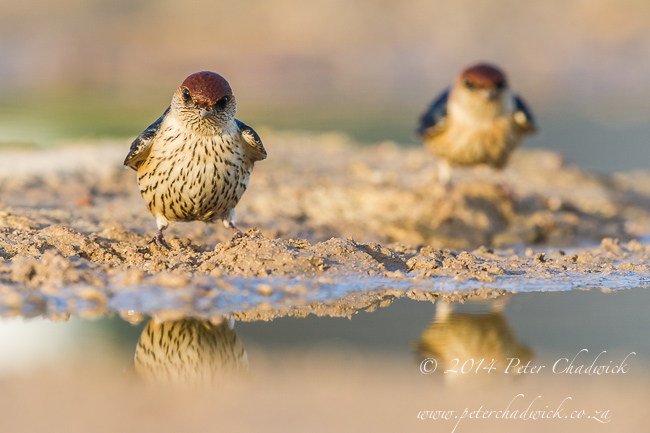 The old historic “Opstal” as it is locally known, provides for a plethora of species with Helmeted Guineafowl, Capped Wheatear, African Pipit and Pin-tailed Whydah feeding at ground level, while the skies above are occupied in the summer months by Barn, White-throated and Greater-Striped Swallows and Brown-throated, Banded, Common House and Rock Martins. Speckled Mousebirds, Familiar Chats, Cape Weavers and Cape Spurfowls are all common around the campsites next to the vlei where they become part of your holiday, hoping to illicit scraps of food. African Hoopoe and Cape Wagtail nest in the cracks of the stone-walls that are scattered around the historic buildings.

On the drive from the camp down to Koppie Alleen and towards the beach watch out for the fynbos endemic Black Harrier as they quarter low over the ground. Black-shouldered Kite and Jackal Buzzard are other common raptors while rarer sightings of Martial Eagle, Secretary Bird, African Goshawk, Southern Pale Chanting Goshawk and Black Sparrowhawk may also be had. White-throated Seed-eaters and Yellow Canaries feed on the seeds of the various grasses and restio’s growing next to the roads. In the protea stands Cape Sugarbird and Orange-breasted Sunbird flit among the flower heads along with Lesser Double-collared Sunbird. 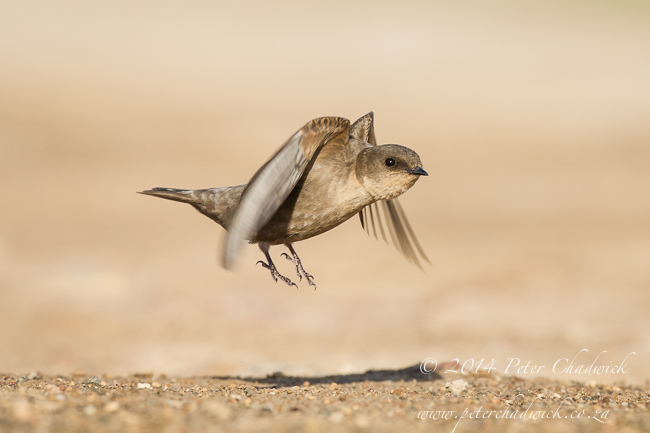 On arrival at the beach parking at Koppie Alleen expect to be greeted by friendly Three-striped Mice, Redwinged Starlings and Cape Buntings. On the Intertidal rock platforms Kelp Gull and African Black Oystercatchers are common and in summer they are occasionally joined by the European Oystercatcher, Grey Plover and Ruddy Turnstone. Large flocks of Swift and Sandwich Terns patrol the coastline and the rare Damara Tern also puts in occasional appearances. From May to November, the seas are filled with the highest densities of Southern-right Whale found anywhere in South Africa. They come to the protected waters to give birth and mate and by sitting on a high point you can easily count in excess of 50 of these magnificent marine mammals. De Hoop Nature Reserve is definitely one of those reserves, where through continual exploring and return visits you can discover a wealth of bird, animal and rare plant species while enjoying a comfortable and relaxing holiday away from the hustle and bustle of daily life. 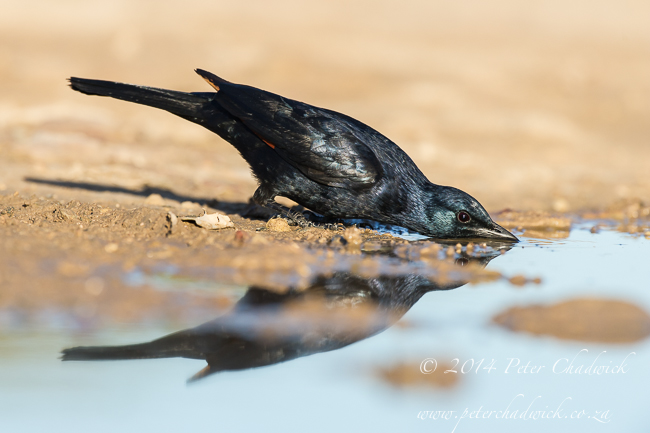 Season and weather: The climate is Mediterranean with warm summers and mild winters. Wind is present throughout the year with rain falling mainly in the winter months. Always be prepared for sudden changes in the weather. The summers are the dry and dusty months, whilst winter is the time when the fynbos is lush, green and in flower. The best months to visit are April and September.

Habitats: The reserve is extremely diverse with its habitats, covering mountain, limestone and coastal fynbos, whilst numerous wetlands and the vlei are surrounded by thicket vegetation. The marine habitats range from rugged cliffs to long sandy beaches.

Recommended Viewing Points: Koppie Alleen The Opstal The Vlei Trail The Klipspringer Trail at Potberg Farmlands on the drive into the reserve.

Accomodation & Activities: De Hoop has a range of accommodation from basic camping through to luxury beach houses. There is also the option of hiking the five day Whale Trail. Walking is possible throughout the reserve and there are a few options for riding mountain bikes.

Getting There: From Cape Town take the N2 to Caledon. From there head to Bredarsdorp via Napier and then take the R319 to Swellendam. After a few kilometers turn right at the De Hoop/Infanta sign. Follow this gravel road for about 60km’s and follow the signs to the reserve. The journey from Cape Town takes approximately three unhurried hours to cover the 230 kilometers.

The De Hoop Collection: 028 5421253 or 011 3156599 www.dehoopcollection.co.za This email address is being protected from spambots. You need JavaScript enabled to view it.