A light mist rose above the chilly waters of the Breede River, as the sun lay low over the horizon, casting everything in a ghostly yellow-white glow. In the distance the harsh calls of a Giant Kingfisher carried across the still airwaves and even further away, cries of African Fish Eagles heralded in the new day.

All around us, the open sandbank on the rivers edge read like a newspaper of the previous nights happenings. Large paw prints of a Cape Clawless Otter hauled out from the waters edge and disappeared into a thicket, covering the minute spoor of some or other small rodent. Cape Spurfowl tracks ran alongside that of the otter and the small smudged footprints of a Large-spotted Genet gave away the route of this small nocturnal predator. 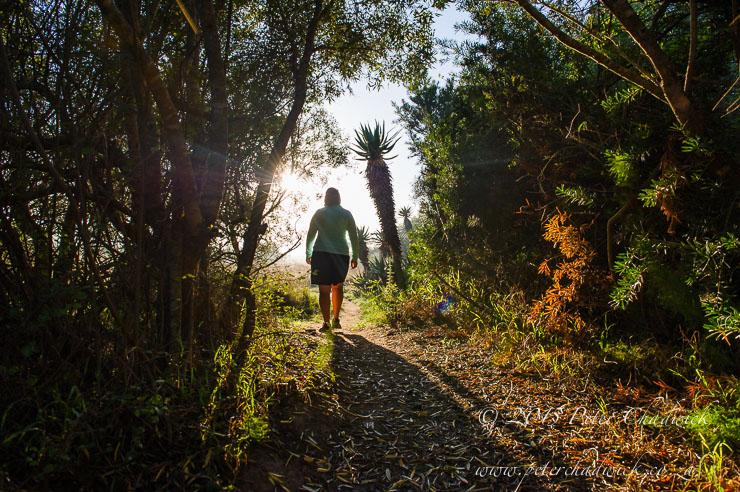 1 of 9: Numerous trails through the reserve really aid the great birding that the reserve offers.

“There it is!” shouted Suné, my eldest daughter, in pure excitement as the Giant Kingfisher flew rapidly past us, plunged briefly into the murky water with a large splash and then speed away out of sight. Standing absorbing the glory of the morning, my family and I waited patiently on the riverbank and as birds flew past, Suné and Xanté who is ten, gleefully called out the names of Egyptian and Spurwinged Geese flying high overhead and Yellow-Billed Ducks, Black Ducks, Reed Cormorants and African Darters that flew up and down the river course. Leaving the river behind us, Xanté led us along a small winding trail through riparian thickets where massive Aloe ferox’s that were covered in spiders webs towered above us and Acacia karoo trees were heavily laden with ripening seed-pods. The sounds of birds calling echoed all around us and with careful searching we found small groups of Red-Faced and Speckled Mousebirds, Cape White-eyes, Cape Robin-Chats, Cape Batis’s, Sombre Greenbuls, Acacia Pied Barbets and Spotted Prinia’s all feeding amongst the greenery. 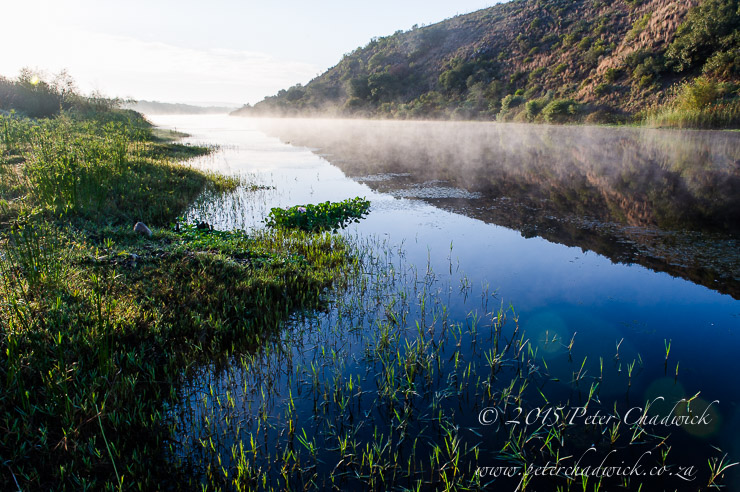 2 of 9: Light mist rises from the Breede River at dawn.

Reaching our planned destination of the “Viewing Deck”, that overlooks a bend in the river, we hauled off our rucksacks and packed out a picnic breakfast where we soon enjoyed cups of hot chocolate that were eagerly dunked with homemade rusks. Here, the birds came to us with Lesser Swamp Warblers and Cape Wagtails flittering over the waterweed and Common Waxbills fed amongst the sedges. Brown-throated Martins scooped small aerial insects from just above the waters surface as fish jumped repeatedly in the river with the concentric rings of their splashes attracting hungry Reed and White-Breasted Cormorants. A flash of colour showed where a Malachite Kingfisher sat perched over the water on a wavy reed stalk and nearby its larger cousin, the Brown-Hooded Kingfisher, called from within a woody thicket. 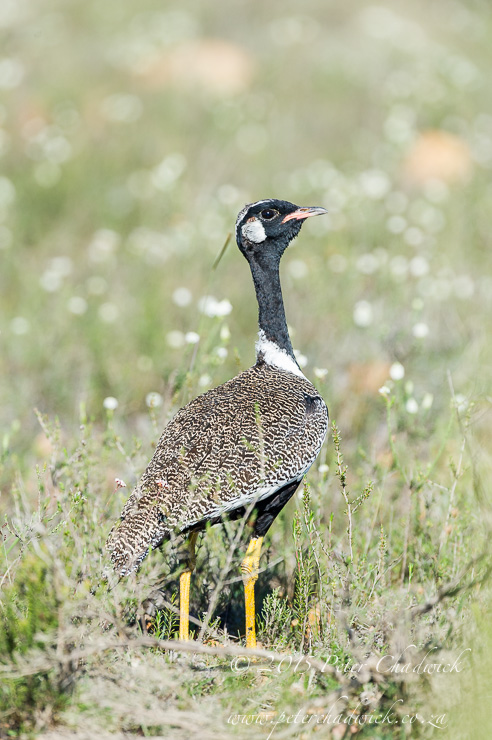 3 of 9: A male Southern Black Korhaan.

With appetites now satisfied, we continued along the walking trail back to the “Lang Elsies Campsite”. Stopping suddenly and stooping low to the ground, Xanté, excitedly called out “Hey! This looks like the aliens have landed on earth, look at this grasshoppers long funny pointed face”. Further along, she found us delicate Cherry-spot Moths and brown butterflies that had huge eyespots on their wings and which flew up from beneath her feet as she passed through the damp grasses. 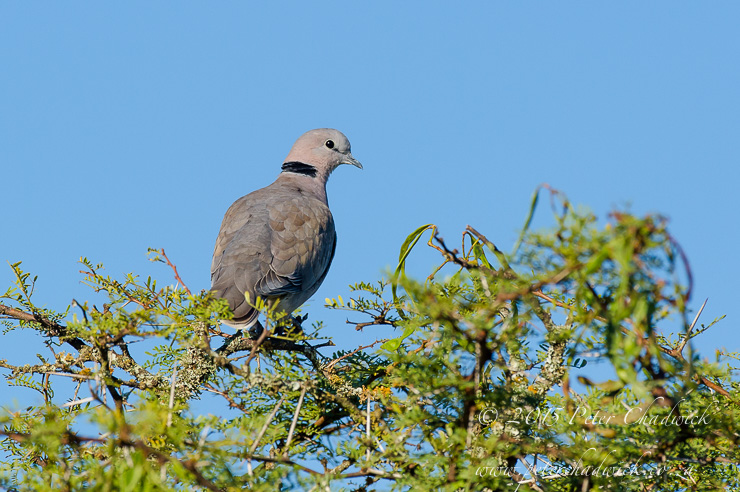 Back in the camp, Cape Weavers, Pied Starlings, Cape Sparrows and Southern Boubou’s hopped between the tents and caravans, gleaning scraps of food that had been discarded by the numerous campers. Hadedahs and African Hoopoes wandered the green lawns, probing their long bills deep into the soils to pull out fat wriggling caterpillars and worms and as Yellow Canaries called from the tops of the trees. “A Southern Tchagra, its there under that bush amongst the shadows and is flicking over dead leaves,” whispered Suné while eagerly pointing. The tchagra was a special find as an endemic and somewhat shy species and we watched it moving through the shrubbery, creeping slowly after it while trying unsuccessfully to photograph it, much to the amusement of the other campers. 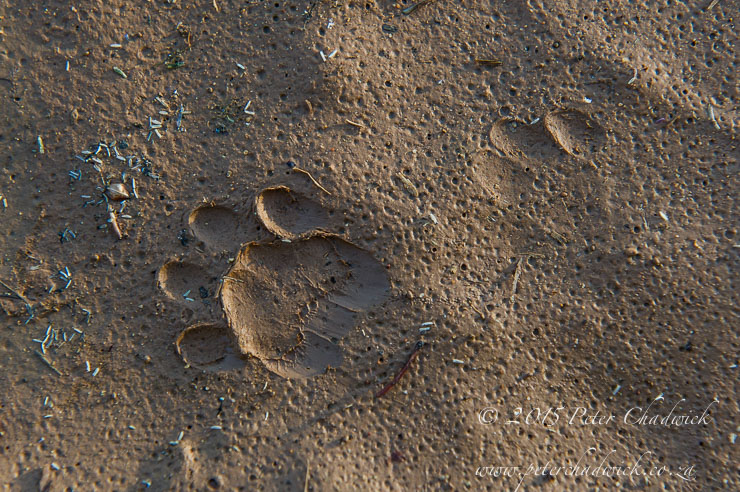 5 of 9: Genet tracks left along the banks of the Breede River.

Deciding to leave the campgrounds, we were aboard the vehicle and heading out on to the twenty or so kilometers of well-maintained dirt road that circumnavigated the reserve, and which allowed us to explore its open short grassy plains and patches of Renosterveld and Fynbos. Initially appearing pretty barren of life, a slow walk through the grassy areas showed a variety of beautiful small flowers including dainty Gladiolus’s, Fire Lilly’s and delicate pinkish-white Pelargoniums that Suné, who is also trying to become an avid photographer like me, attempted to photograph by wriggling low on the ground and yelping exclamations every time a thorn or sharp object dug into her . Bees, beetles, butterflies and small hover-flies flew between the colorful blooms, pausing to drink at the nectar and in so doing performing the vital act of pollination. Cape Clapper Larks flew up from near us, flying high in characteristic display before dropping down to the ground again and disappearing from site in amongst the drab coloured grasses that matched the colour of their plumage. Further away in a large patch of much greener grass, a Bontebok herd fed on the short grasses with their batch of this years youngsters close in tow. Several Denham’s Bustards strutted about together with a pair of regal looking Secretarybirds and a pair of Blue Cranes that stood off to one side preening one another affectionately. 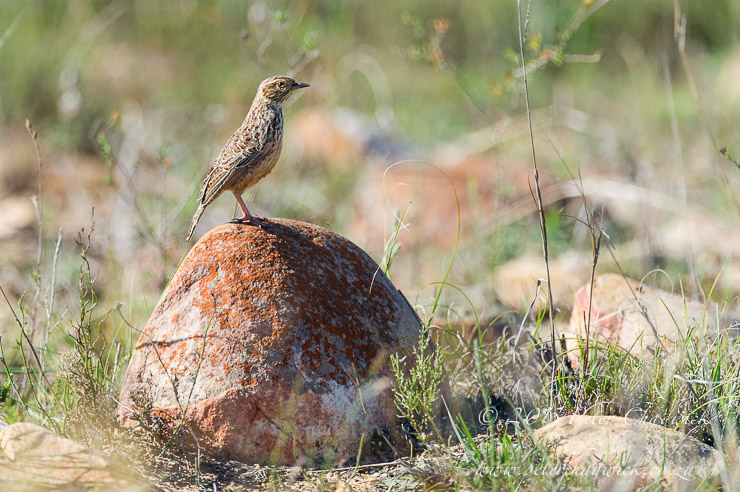 Large-billed and Red-Capped Larks were plentiful and often gave away their presence by calling, with the Large-billed Larks making use of the tops of small boulders to help the sounds of their singing to carry further out across the airwaves. A Southern Black Korhaan was disturbed by our walking and skulked away trying hard not to be seen, but burst into frightened flight when a Black Harrier, that was quartering back and forth low over the ground, flew directly over it. On the crown of the reserve, a fire had ravaged across the veld, leaving behind it the blackened out skeletons of bushes in it wake. On the ground however, lush green grasses were sprouting in abundance and this attracted herds of grazing Bontebok, Grey Rhebuck, Red Hartebeest and two separate families of Cape Mountain Zebras. Stone Chats and Fork-Tailed Drongo’s followed the feeding herds, swooping from their perches to snap up insects that had been disturbed and either took them on the ground or snapped them in mid-flight from the air. 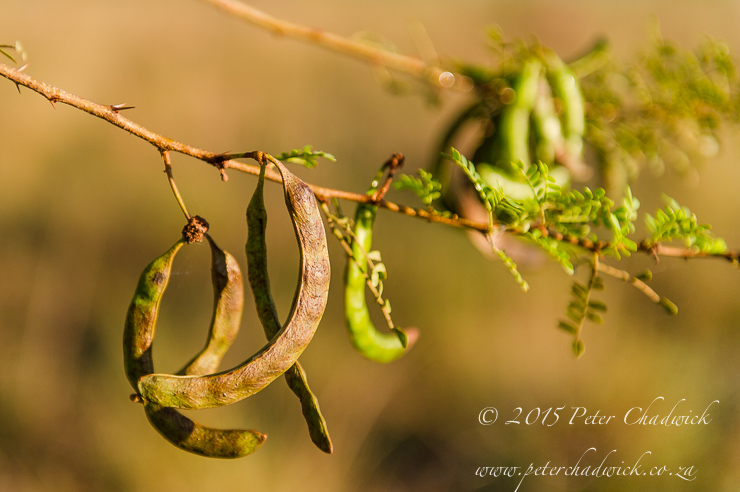 Near the old entrance gate to the reserve, patches of mature fynbos were covered in flowering proteas and tubular-shaped pink ericas. Southern-Double Collared, Malachite and Orange-breasted Sunbirds flew between the erica’s with the males chasing off any rivals that came too close to “their” feeding patch and females. On the proteas, Cape Sugarbirds perched calling with rough grating sounds and with their long tails waving in the wind. In a rank wetland that lay alongside the fynbos, a Cape Grassbird clambered to the top of a scraggly bush and called loudly and was soon answered by several other Grassbirds in the surrounding vicinity. 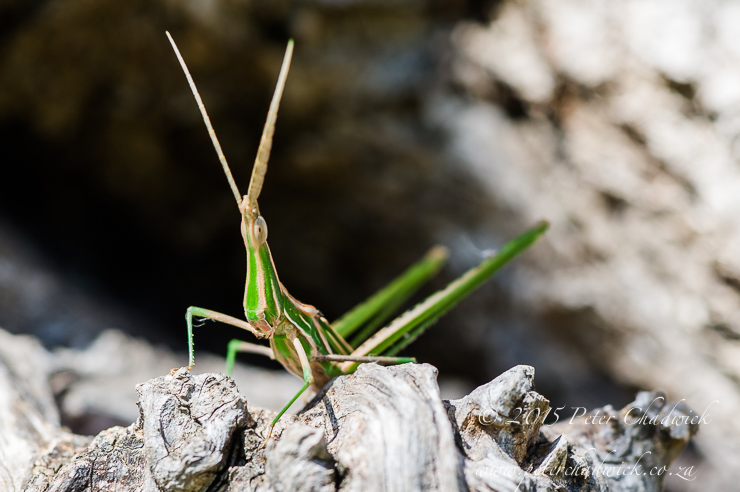 Neddicky, Grey-Backed and Le Valliants Cisticola were also sighted within from within the wetland and male Cape Widowbirds displayed from reed stalks, fluffing out their black and yellow plumage in the hope of attracting the flocks of passing female widowbirds. With the middle of the day having enjoyably passed and with the girls reminding me that their appetites again needed filling, we forgot about birding for a while and drove down to “Die Stroom” picnic site that lay alongside the tranquil banks of the Breede River. Here, large trees provided ample shade for a late picnic lunch that was followed by a lazy and highly satisfying snooze before we once again set out to explore the landscapes of Bontebok National Park. 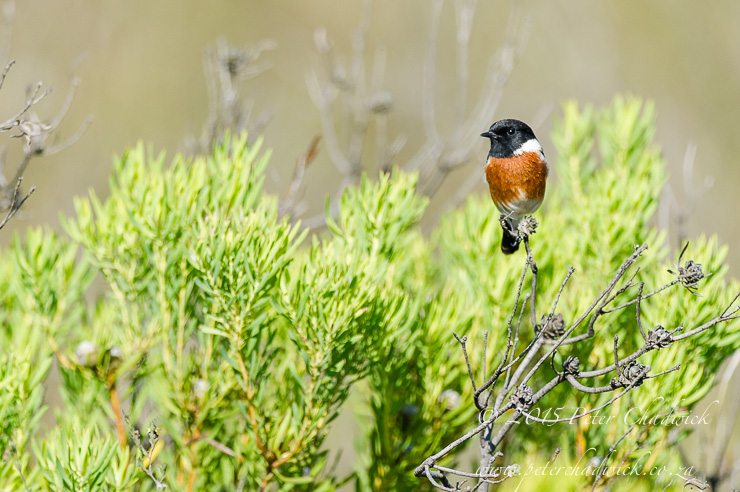 Season & Weather: The climate is Mediterranean with warm summers and mild winters. Wind is present throughout the year with rain falling mainly in the winter months. Always be prepared for sudden changes in the weather. The summers are the dry and dusty months, whilst winter is the time when the veld is lush, green and in flower.

Accommodation & Activities: 10 Self-catering chalets lie on the banks of the Breede River at the Lang Elsie’s Restcamp together with caravan and campsites- with or without power. A number of short hiking trails depart from the camp and swimming, canoeing, fishing and mountain biking is allowed in the reserve.

Closest Town
Swellendam
Getting There
Bontebok National Park lies just on the outskirts of the historic town of Swellendam on the N2 national road. Signboards to the reserve are easily seen near the weigh-bridge on the N2 on the western side of Swellendam.