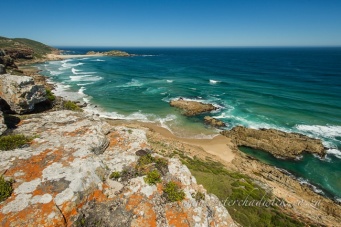 Robberg Nature Reserve, situated on the outskirts of the Southern Cape town of Plettenberg Bay, forms a long narrow peninsula that stretches out for approximately 4km's into the sea.

The terrestrial nature reserve is bordered by a productive and critically important marine protected area that host’s whales, dolphins, seals, sharks and numerous critically endangered line-fish species. Bird-life is prolific and a number of fynbos endemics can be found on the reserve.

Often referred to as the Cape Point of the Garden Route, the fynbos covered peninsula has a rich human history dating back some 120 000 years with Nelsons Cave providing some of the best evidence of the Stone Age inhabitants. Scenery is spectacular and an excellent system of trails offers three choices of circular hiking routes of increasing difficulty and distance.

Best Time to Photograph
Given Robberg Nature Reserves spectacular location, photography may be undertaken throughout the year and both morning and afternoon provide excellent opportunities for photography. The fact that the entrance gate stays open late in the evenings provides ample opportunities for landscape photography. Winter storms passing through the reserve will provide excellent prospects for capturing dramatic seascapes. The Cape Fur Seal colony is most active in the early morning and late afternoon and dolphin pods cruise the shoreline in early to mid morning and again in late afternoon.
Type of Photography
Best Time of Year
Throughout the year
Photographic Tips
The high points overlooking coastal inlets are worth waiting at during early morning and late afternoon to photograph pods of dolphins and seals and sharks as they cruise the backline of the breaking waves. The Cape Fur Seal colony may be photographed either form the cliff tops or from a marine mammal watching boat that departs from Plettenberg Bay.
Recommended Gear
Given that hiking is essential for photography, a good photographic backpack is necessary. Also carry more water to drink than you normally would do, as there are no opportunities for refills along the route. Sunscreen is also essential. Be extremely cautious along the cliff sections as strong gusts of wind suddenly come up. A tripod is essential for most types of photography. Given the wide diversity of photographic opportunities that Robberg offers, a range of lenses from wide-angled right through to telephoto lenses are required.

Season and Weather
The climate is generally mild, but extremely hot days can occur in the summer months. Winters are cool and rain can occur throughout the year.
Habitats
Other Activities