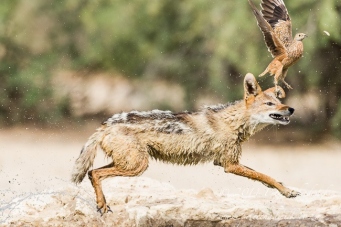 Black-Backed Jackals launching into the air after panic-stricken sandgrouse and doves have become a sought after sighting at the Kgalagadi’s many waterholes. These waterholes are renowned for offering excellent opportunities for predator and prey photos with Cubitjie Quap in the Nossob Riverbed perhaps being one of the best known.

About 11 kilometers north of Nossob Camp in the Kgalagadi Transfrontier Park, at Cubitje Quap waterhole, flocks of Cape Turtle Doves and Burchell’s and Namaqua sandgrouse fall out of the sky in droves.

They then rush to the edge of the waterhole where they greedily scoop gulps of water before rocketing away. The extreme skittishness of the sandgrouse is well founded because, while on the ground, the birds present an easy target for predators. A small number of Black-backed jackals have adapted their hunting strategy to make the most of this daily bounty.

The secret employed by jackals is to arrive before the doves and sandgrouse and lie in close proximity to the waterhole. Once sufficient numbers of birds are drinking, the jackal then cautiously stalks them, getting as close as possible before making a dash with snapping jaws. The technique is not always successful and often the jackal makes repeated attempts. Many a morning passes without the jackal successfully catching a single bird, while on other mornings it may be fortunate enough to catch two or three birds that are consumed nearby.

This waterhole is also known for plenty of bird action, with Peregrine and Red-necked Falcons often preying on the sandgrouse and other small birds that come to drink. In the early morning, when the setting is ideal for photography, the main road offers the best angle for photography, while the loop to the north throws golden afternoon light onto the waterhole During the day, you are likely to see Bateleur, Secretary Birds and Lappet-Faced and White-backed Vultures drinking and bathing from the waterhole. 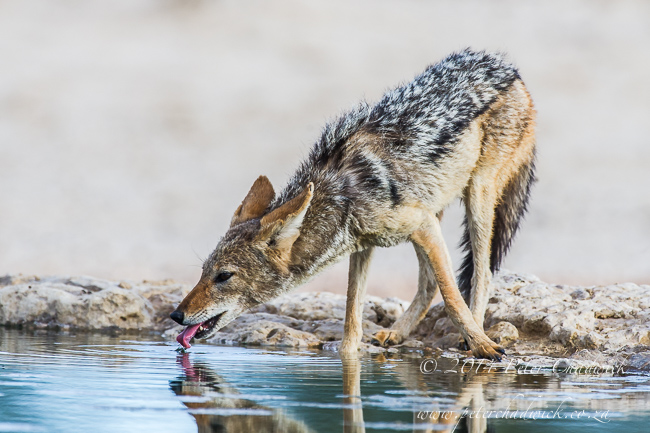 1 of 12: Arriving early at the break of day, the Black-Backed Jackal quenches its thirst before settling down to await the arrival of the birds. 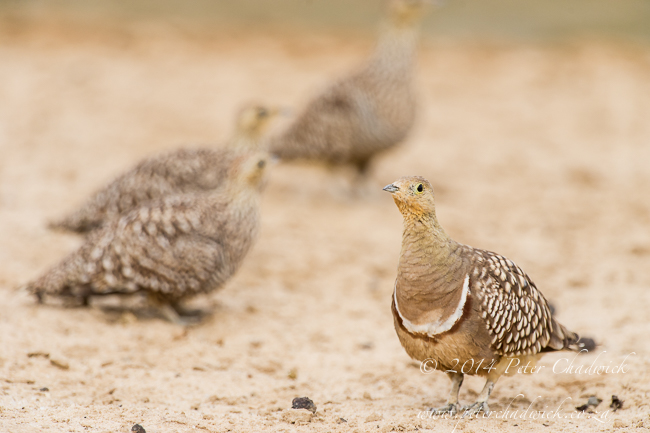 2 of 12: Namaqua and Burchell's Sandgrouse arrive in large numbers, landing in the open to watch for predators before cautiously approaching the water to drink. 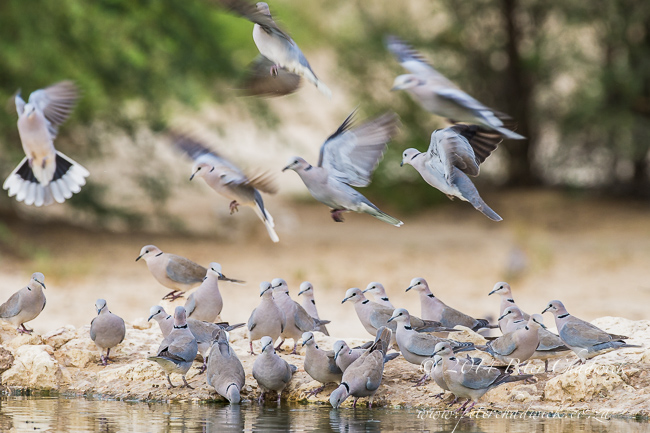 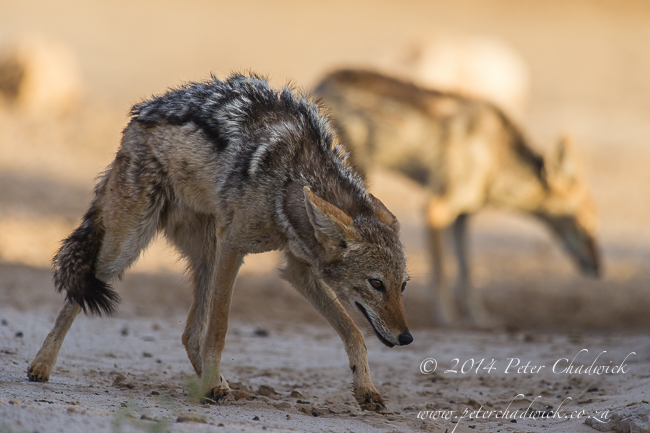 4 of 12: The dominant Black-Backed Jackal clearly warns another jackal that this is his hunting ground and the other must move on. 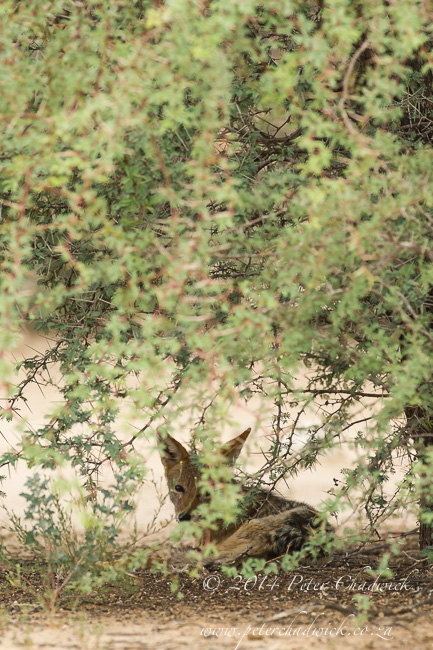 5 of 12: Initially, the hunting jackal hides under an Acacia tree, pretending to sleep while actually carefully watching the arrival of the drinking birds. 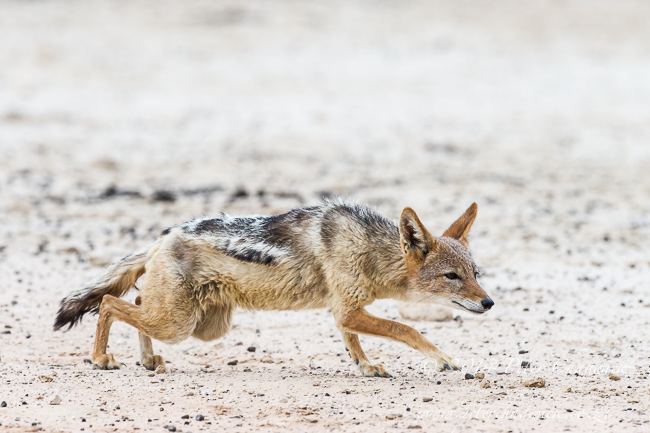 6 of 12: Once sufficient numbers of birds have arrived at the waterhole, the jackal cautiously begins to stalk closer. 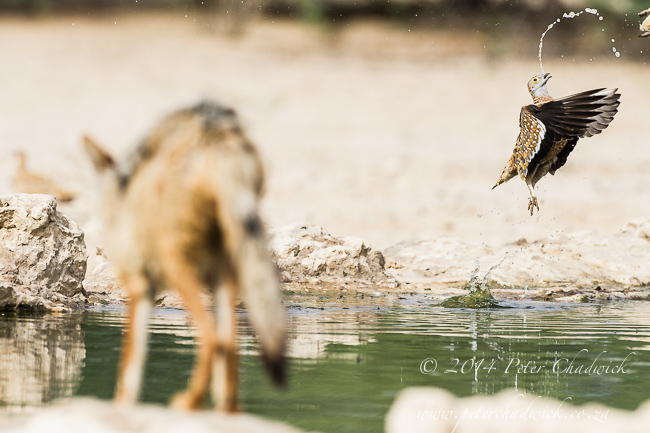 7 of 12: As soon as the jackal reaches the walls of the waterhole, he will freeze and crouch allowing new birds to arrive to drink. 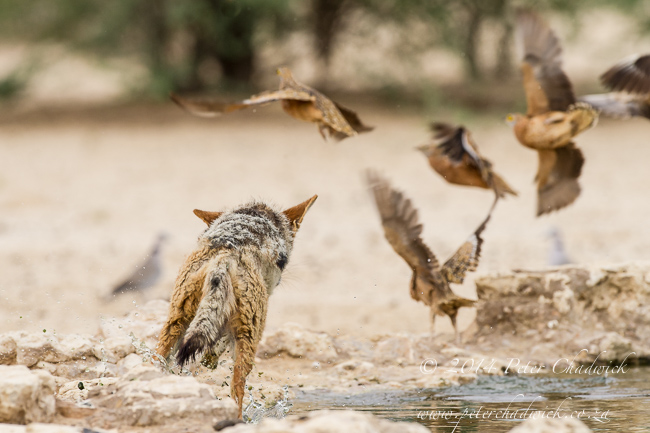 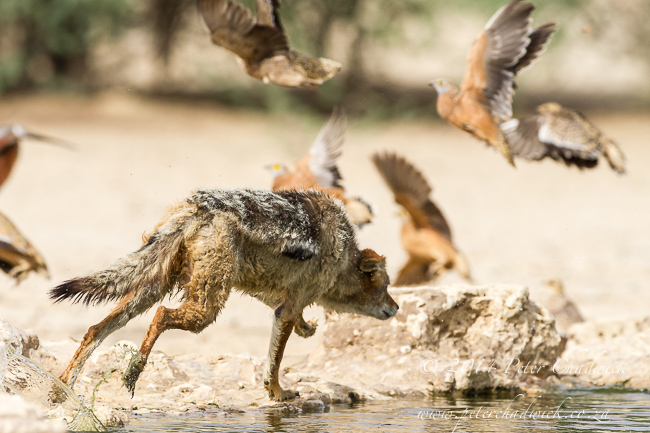 8 & 9 of 12: The jackal then launches at speed, running along the wall of the waterhole as birds scatter into the air in panic to escape. 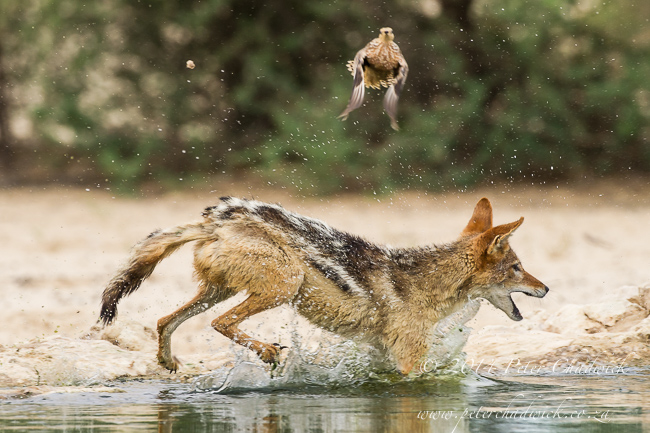 10 of 12: Many of the jackals launches after the birds are unsuccessful, landing him in the middle of the water itself. 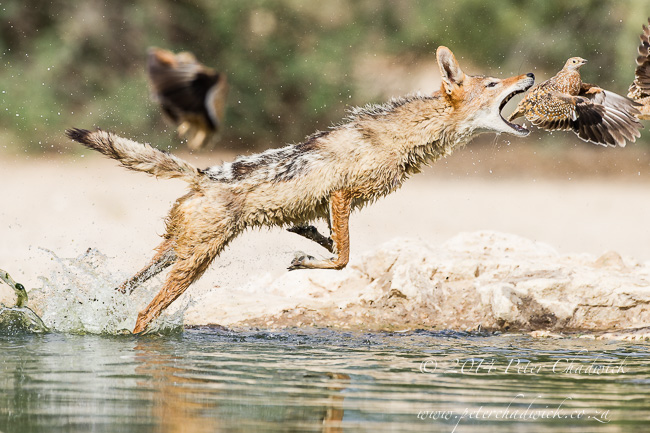 11 of 12: Running through the water, the jackal launches into the air, its mouth wide open, in an attempt to grab at a fleeing Burchell’s sandgrouse. 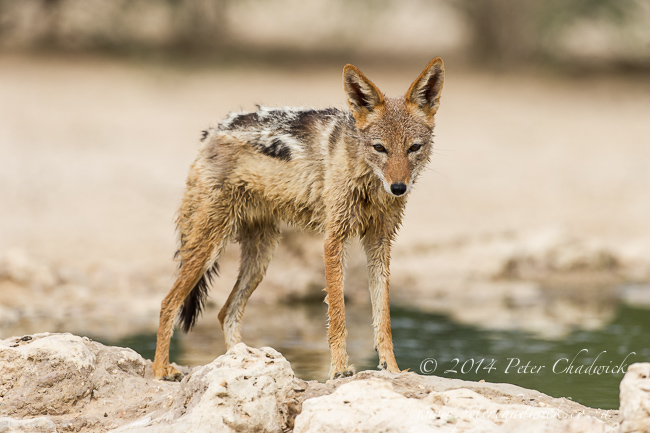 12 of 12: On this morning, the jackal was unsuccessful in his hunting attempts and stands bedraggled and wet on the wall of the waterhole.