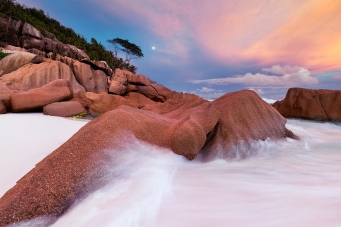 Inspired by moments when the elements of nature combine as if painted by a god, Hougaard creates scenes so beautiful that one has to take the time to stand back in awe and marvel at the beauty of the world we live in.

Hougaard went from pursuing a career in engineering to that of self proclaimed landscape photographer at the young age of 19. A bold decision, but one that seems justified by the beauty of his photographic expression.

"I think people often try to over-interpret photographs and they miss the bigger picture. I'm a realist and through strong composition and complementary lighting I try to distill the essence of a location. I don't pursue awards or recognition. It took me a while to realise that prizes don’t mean much in a subjective industry dictated more by hobbyists than professionals. The pursuit of such merits makes you forget your purpose. I love what I do and I'm thankful for the opportunity to earn a living from it".

My style continues to develop and progress. I find myself moving away from my beloved wide-angle lens more and more. With every shoot I am able to capture locations to a higher personal satisfaction and I learn something new every day. I haven't traveled much outside of the Cape (never mind outside of Southern Africa!) but I now have a 4x4 vehicle so I can travel more freely.

My portfolio of Southern Africa is still far from complete, but I dream of landscapes beyond this continent and hopefully my portfolio of this country will be a stepping stone to something bigger. I have great ambitions and the next 18 months will be an exciting time so stay tuned!

In this stunning portfolio of landscape images, Hougaard shares some of his latest images. Enjoy!
All images are ©Hougaard Malan 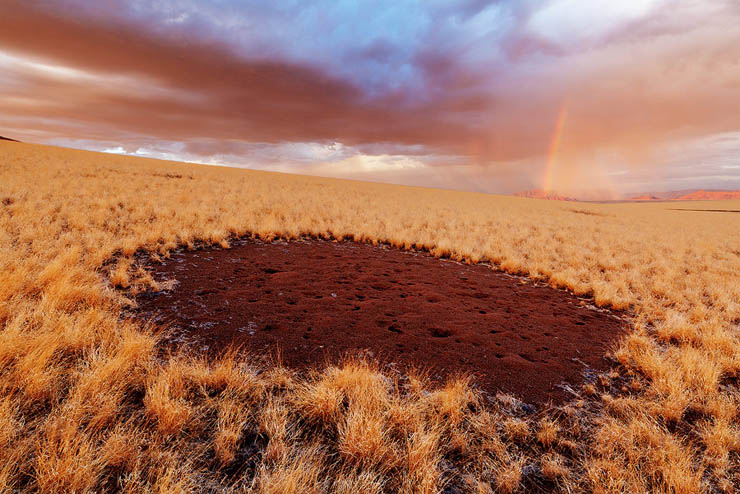 A small rainbow is painted in colorful sunset skies over the circle dotted grass plain near Sesriem
Virtually nothing is known about these mysterious circles as you'll find on Wikipedia - "Fairy circles are enigmatic barren patches, typically found in the grasslands of the western part of southern Africa.

They are most prolific in Namibia, but are also present in Angola and South Africa.[1] These fairy circles consist of round areas barren of vegetation; as yet there is no clear picture as to how they are formed, although scientists are researching the matter. One theory suggests termites as the creator of these circles, but recent studies have stated that there is no evidence termites would cause this phenomenon. In the oral myths of Himba people these barren patches are said to have been caused by the gods and/or spirits and natural divinities.

Studies done by South African scientists shows that these circles are under continuous development. They grow in diameter, expanding to as large as 9 m in diameter, where they mature and "die", filled in by invasive grasses" 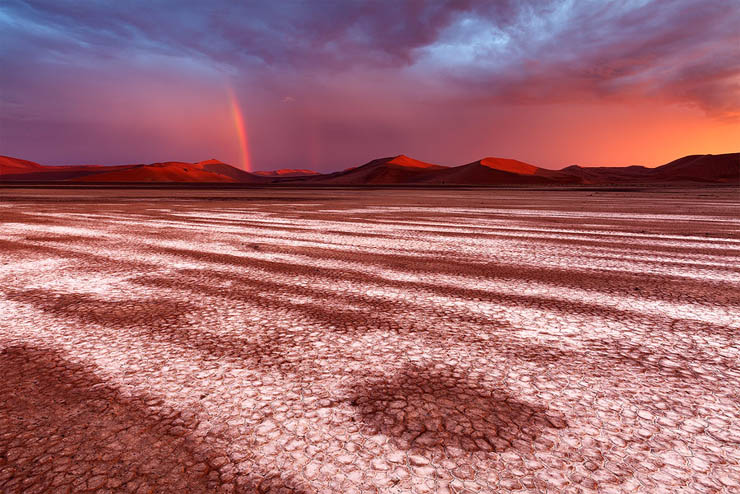 After outdriving and shooting a monster stormcell in the Tsaucheb valley all afternoon, the storm headed Southwards into the dune sea just a few km short of the 4x2 parking lot and I headed into the cracked pans to get ready for sunset. The magical recipe of geographical circumstances at Sossus did what I knew it would and the sun dipped in below the cloud cover briefly illuminating the dunes in blood-red light and painting a partial rainbow in the storm. I've experienced a lot of amazing sunsets in my life, but the location of this was one was just too good to be true and I all I could utter was a few laughs of disbelief. 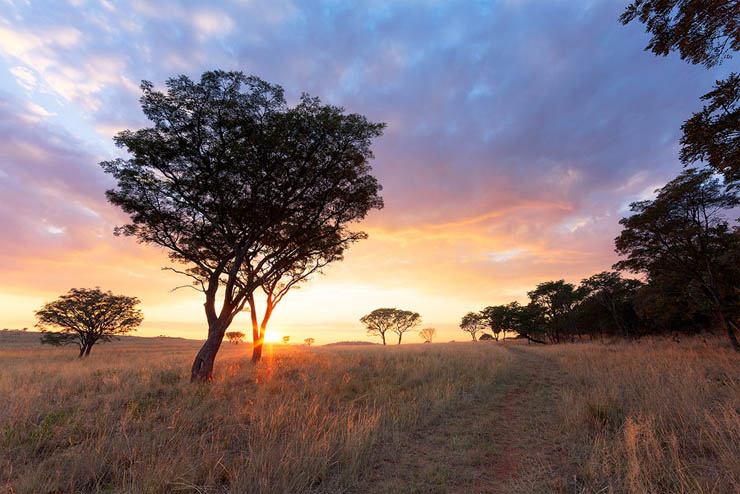 The sun rises over classic African bushveld that reminded me of Disney's Lion King scenery. 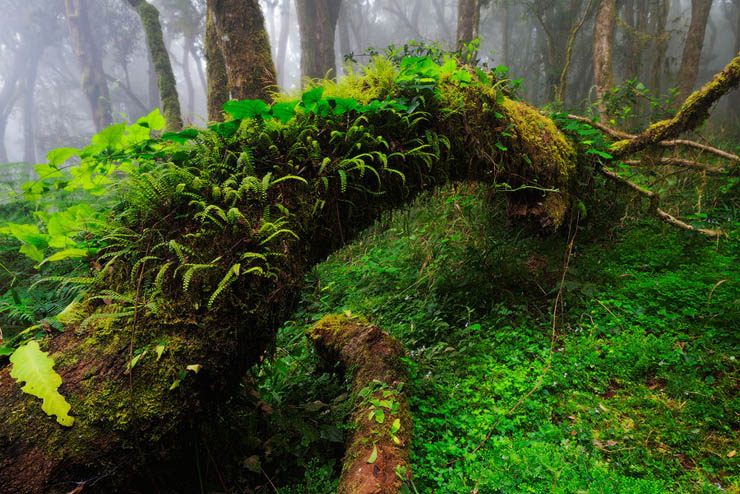 Many years in search of properly green indigenous forests in my home country finally payed off this year when I found these forests in the Magoebaskloof area. Even upon being in the right area, it took lots of exploration to get to the few rare spots with lush undergrowth. Upon returning home I spent two weeks in bed battling malaria and tick fever. The effort that went into these shots has just made the location so much more special to me. 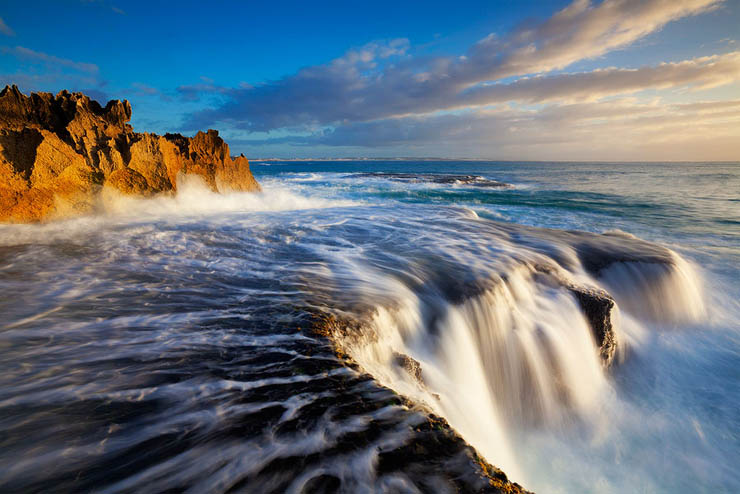 Water washes in all directions as waves batter the multi layer rocks of the Arniston coastline in warm dawn light. This specific cauldron in the coastline is very curteous to photographers as it absorbs the kinetic energy of the wave and softly pushes over the edge instead of crashing over in a dramatic display of camera wrecking water.

Once the wave pulls away and the water flows back off the rock shelf it creates brilliant water cascades.Arniston is just a few kilometers from the geographic confluence of the Indian and Atlantic oceans at the Southernmost tip of Africa, hence the title. 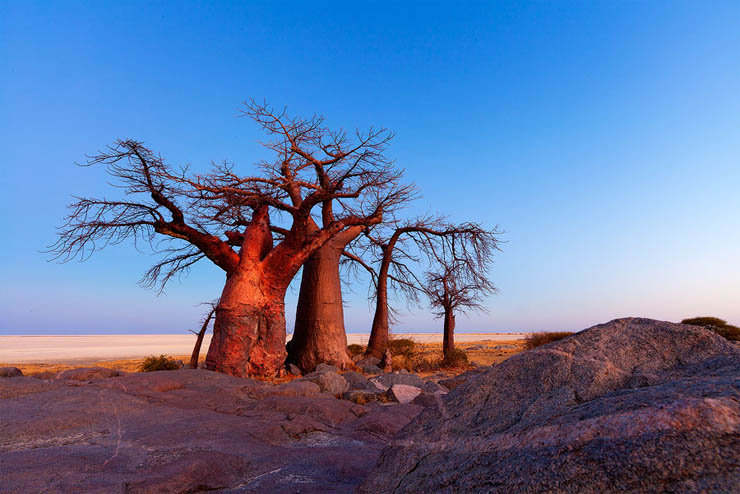 Once the sun has set in the West, a slowly changing palette of orange and pink slowly fills the sky. The warm colors climb slowly higher to give way to a soft blue sky before the black of night descends. This blue hangs in the heavens for a few minutes, like an equilibrium between night and day. Witnessing this metamorphosis of light over the endless nothingness of the Makgadikgadi pans in Botswana is an absolute bucket list life experience! 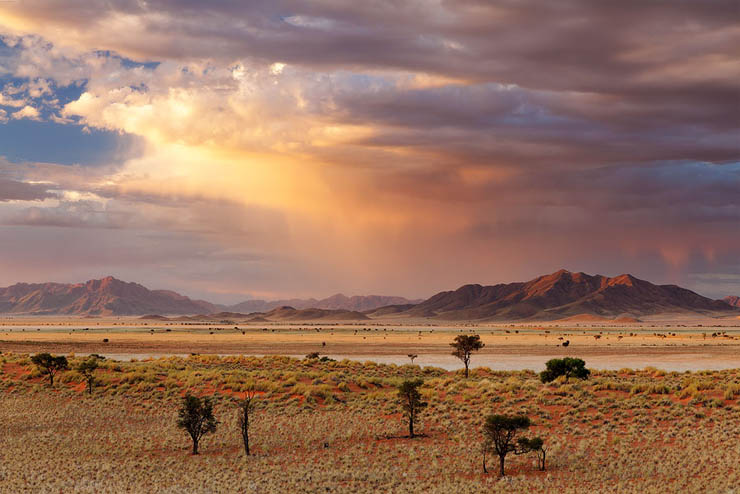 Ghost rain hangs from a retreating storm cloud over the mountains of the Namib Rand as last light crawls up the highest peaks in the area. This specific shot was taken on Excelsior and it looks onto the plains of Dina.

The Namib Rand conservancy is a private nature reserve that is formed by a collection of consolidated farms that have been bought from farmers by people who use it simply to enjoy nature. Most of the fences on these farms have been taken down, allowing the wildlife of the area free movement between the desert wilderness and these farms that provide plentiful grazing after the summer rains.

In a world that is primarily just being destroyed and harvested for personal benefit, it's good to see nature conservation on such a scale being done completely privately. 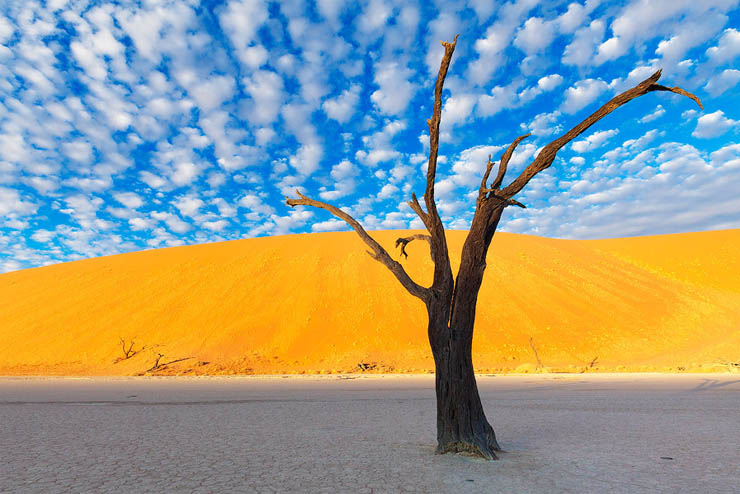 These trees don't have much of a lure to me as they've been photographed in all imaginable weather, from every possible angle...BUT, what is a portfolio of Namibia without a Deadvlei tree?? 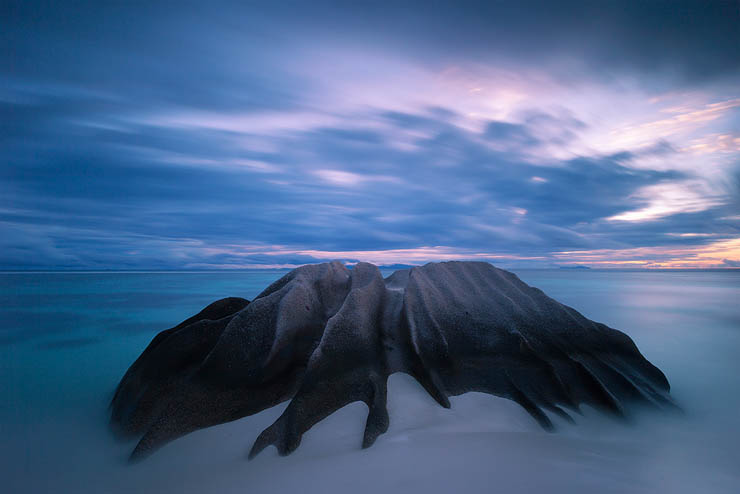 Many things can be said about this rock on this beach. It isn't very well known yet, but I'm confident that it will become the Mt Rainier, Ayers Rock, Colombia River Gorge, Deadvlei, Twelve Apostles...call it what you wish, of the Seychelles. It's one of those landscapes that are just so photogenic that you have to be photographically challenged to take a bad photo of it. The one difficult part is that if high tide doesn't coincide with sunset, then it is surrounded with footprints.

Many people will probably recognize it from Michael Anderson's work and it was indeed his photos that inspired me to visit the Seychelles myself. I like to think that I'm not a comp-stomper, but it was just too good to not shoot with at least one sunset. I thought the least I could do is to credit the man. 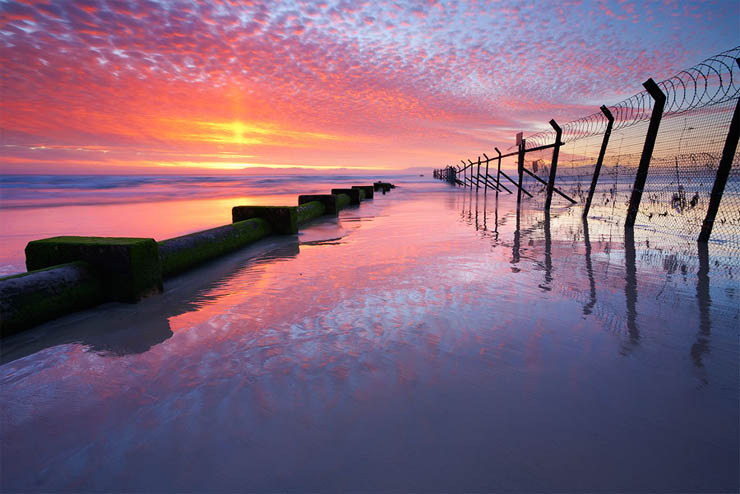 High clouds and sunset creates an amazing palette of colors over the old fence on Strand Beach. You can see the rare natural phenomenon called a light pillar at the center of the highlight. 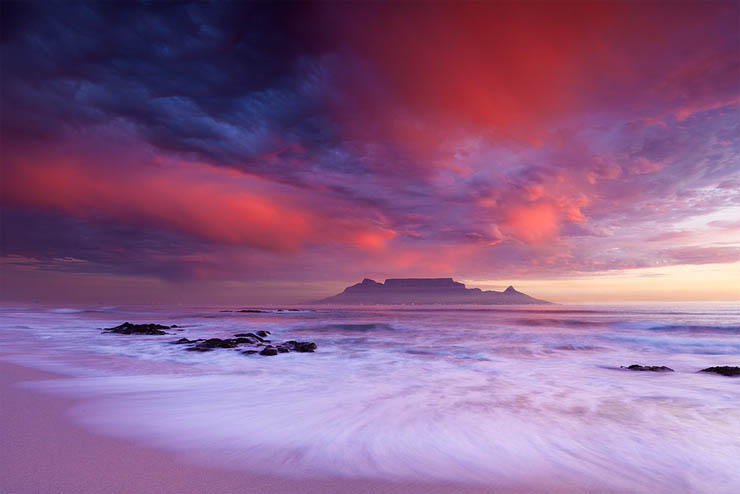 Curtains of ghost rain hang from a storm cloud passing over the Peninsula on a warm May evening as the waves wash over the iconic Blouberg beach. 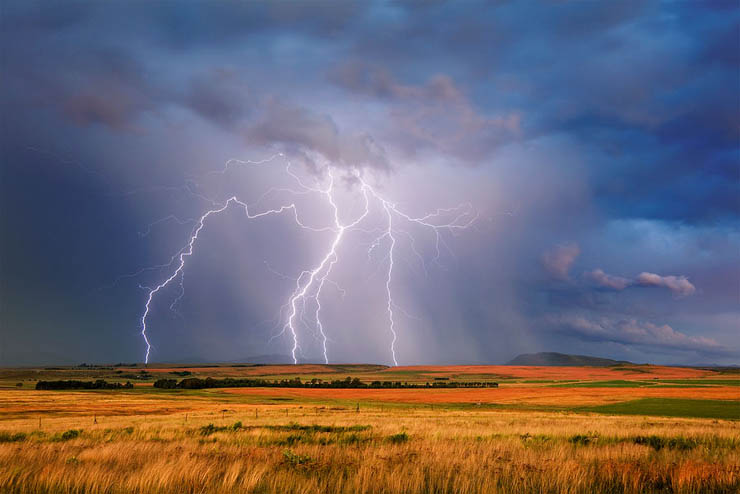 This display of nature's power is certainly a case of the Stormberg district in the Eastern Cape Highlands living up to it's name.

I captured this about 10 minutes after sunset as the last color was fading from the skies. I was exploring an area to the North of the storm about 2 hours earlier and I spent more than an hour driving through it's centre on rural farm roads as the lightning struck all around. Up until that point it was the most powerful storm I had ever experienced. Once I got out of it I drove to a high point and captured the last major strikes as it lost power. 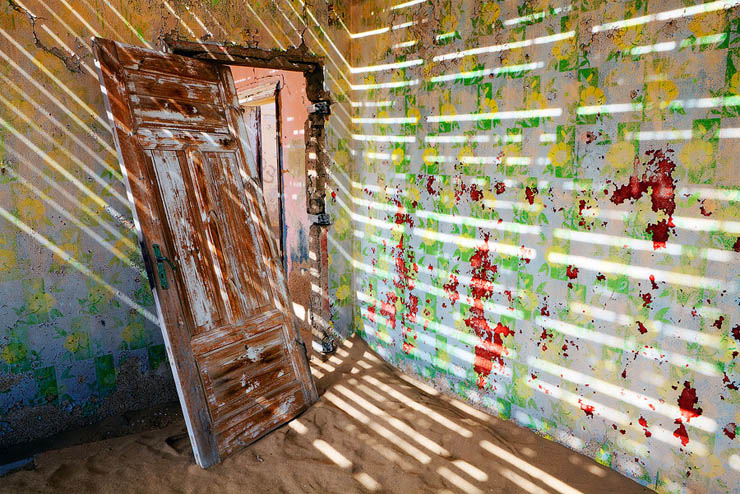 On my first visit to Kolmanskop in 2011 I failed completely to get a single photo I liked. It was extremely hot and I thought that my 18mm lens would be ideal to capture the details of the interiors. Prior to my visit in March 2012 I studied lots of other photographer's work from the location and realised my main mistake was the wide angle lens.

When I got there in 2012 with a workshop client we were blessed with an icy cold misty morning that made it much more bearable to crawl around the sand filled buildings. We got so lost in shooting all the textures, lines and colors that once we started getting tired we realised we had been shooting for 4 hours non-stop!

I got this specific shot as the sun came and went through the mist, momentarily casting these soft light beams through the slats in a broken roof. 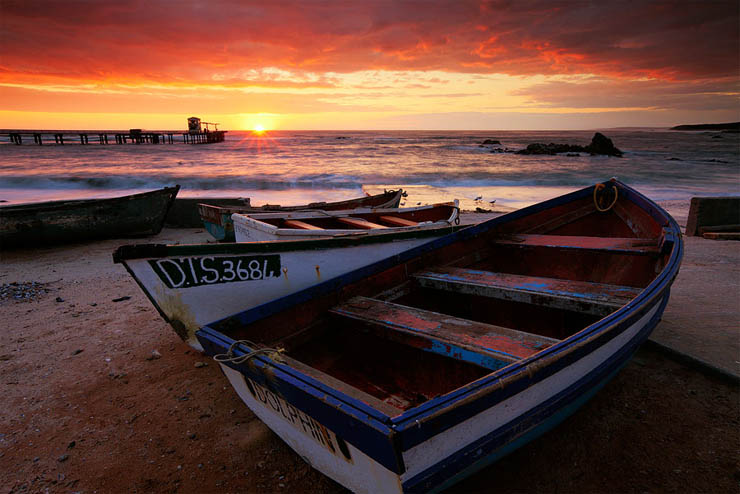 The sun colors the sky as another day comes to an end at the edge of the vast Atlantic ocean. 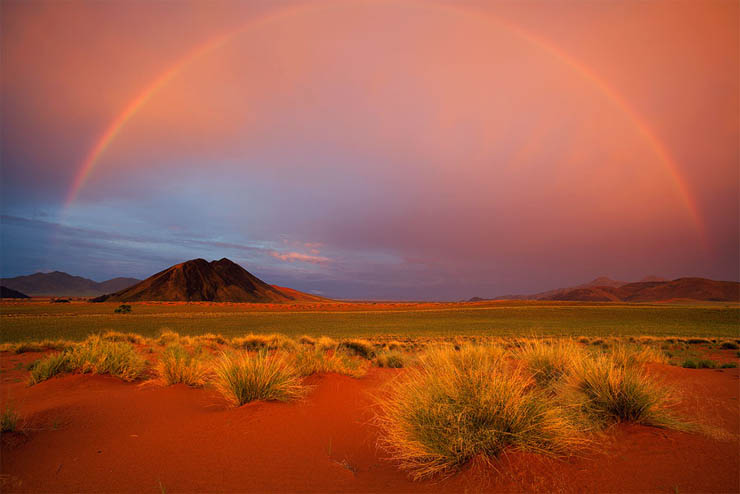 Afternoon thunder showers come to an end as the last light of day slips in below the clouds to paint this rainbow in the heavens above Excelsior.

You can see more of Hougard Malan's work here: http://www.hougaardmalan.com