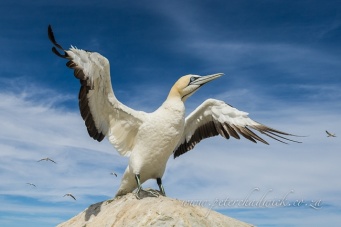 The Cape Gannet (Morus capensis) is losing 1% of its population per annum, which means that in the last 50 years, we have lost 50% of the Gannet population!

Listed as Vulnerable (likely to become Endangered unless the circumstances threatening its survival and reproduction improve) on the IUCN's Red Data List, the decline is in part caused by the continuous heavy exploitation of its primary prey through commercial fisheries.

The Cape Gannet population relies on shoaling pelagic fish, such as anchovy and sardines, for the bulk of its diet. The recent trend of an eastward shift in the range of shoaling populations of sardines and continued heavy commercial fishing along the Cape West Coast, forces the gannets to travel much further in search of food.

Traveling further for prey has a higher energy demand on the breeding adults, who also resort to feeding on offal discarded by fishing boats. The offal is far less nutritious and this in turn has negative implications for breeding success and population health in general.

Breeding only takes place on six islands that lie off the Namibian and South African coastline and the majority of birds remain within 500km's of their breeding site all year round. Some birds will however travel as far as 3000km's when following shoaling fish, with the well-known “Sardine Run” being a prime example of such an event.

The images below portray a glimpse into the lives of these charismatic seabirds that require a concerted conservation effort to stabilise their declining numbers. 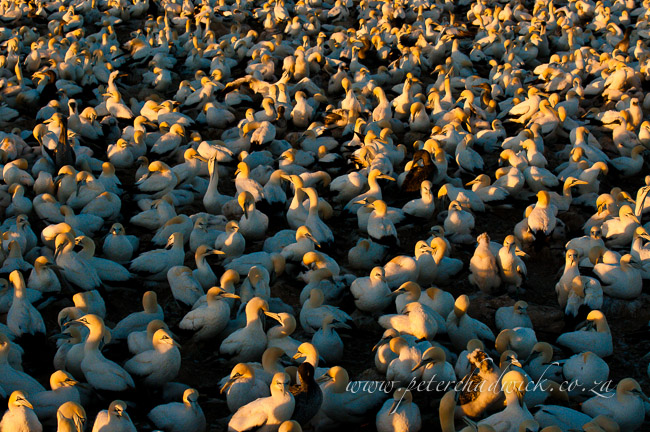 1. A golden glow casts over the heads of the Cape Gannet breeding colony as the last rays of the sun reach out across the sky. 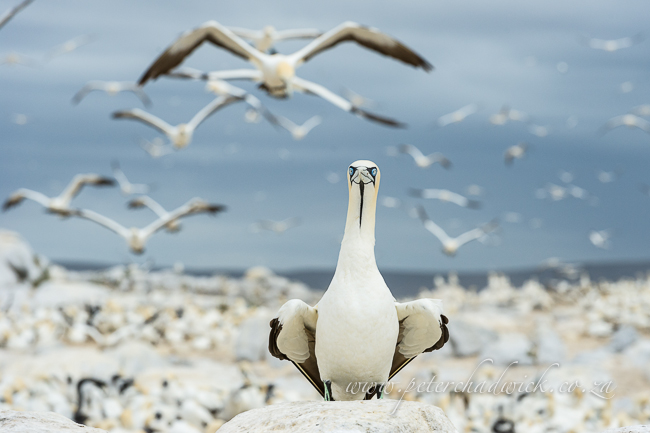 2. A blustery wind that blows across Malgas Island, causes roosting birds to take to flight and hover into the wind and which can only be a considered as sheer enjoyment through the ability of flight. 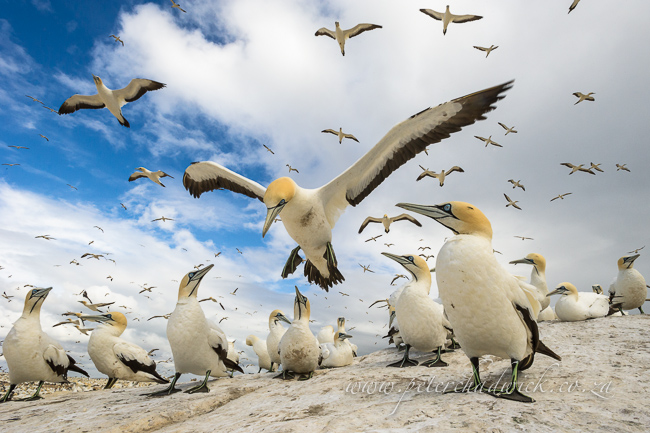 3. Bachelor Cape Gannets gather on a large boulder where they socialize, preen and rest. 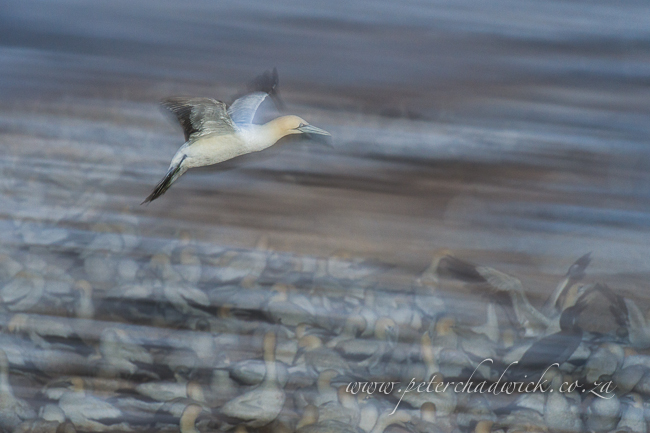 4. With the sun having disappeared over the horizon, Cape Gannets come in at speed to land in the center of their densely packed breeding colony, where they will roost for the night before heading out to sea again the following morning. 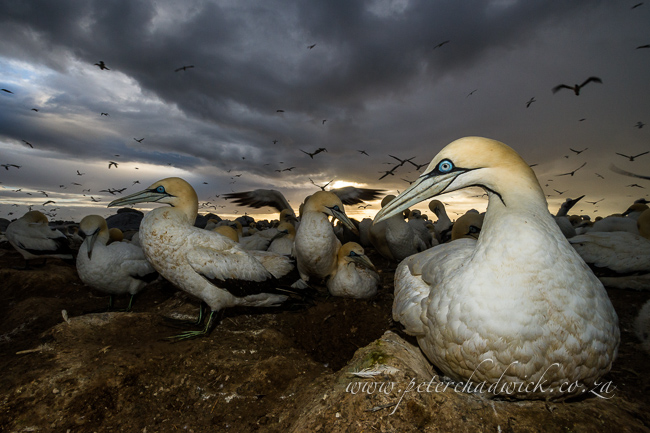 5. The rising sun tries to break through the dense storm cloud that hangs over nesting Cape Gannets. 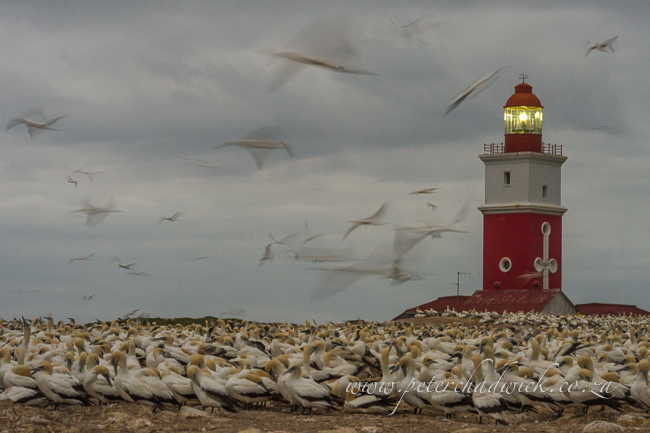 6. The lighthouse on Bird Island in Algoa Bay beams out as dusk approaches and Cape Gannets still streak across the sky in search of their landing spots where they will overnight. 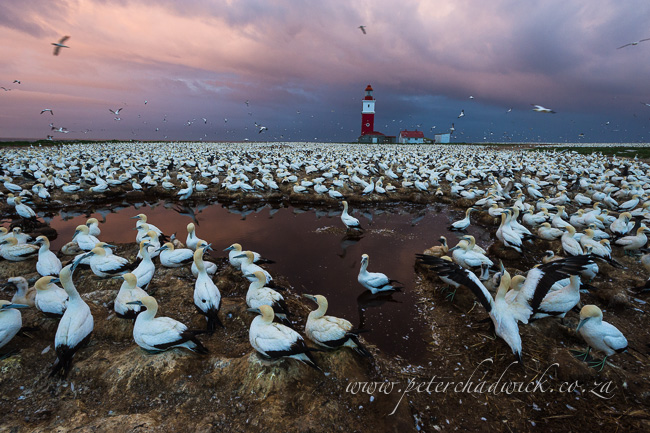 7. Bird Island in Algoa Bay is the only known breeding colony where Cape Gannet populations are increasing in numbers, though unseasonal rain storms and increasing temperatures place the birds at risk to diseases such as avian cholera and avian malaria. 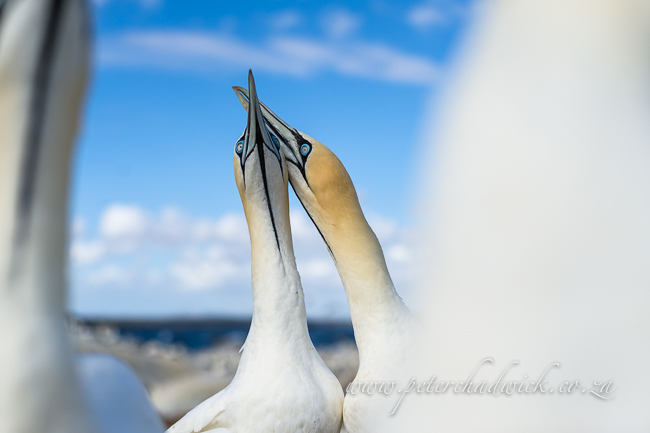 8. A Cape Gannet pair “Skypoint” as part of a complex greeting ritual after having spent the day apart. One of the pair was incubating on the nest, while the second bird spent the day feeding at sea. 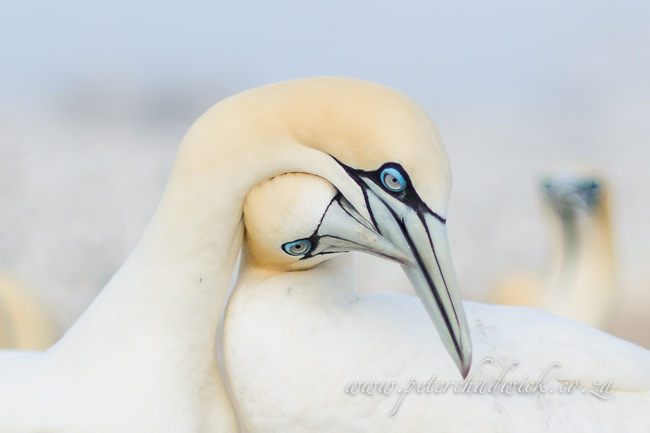 9. A Cape Gannet pair nuzzles affectionately as part of a pair strengthening ritual. 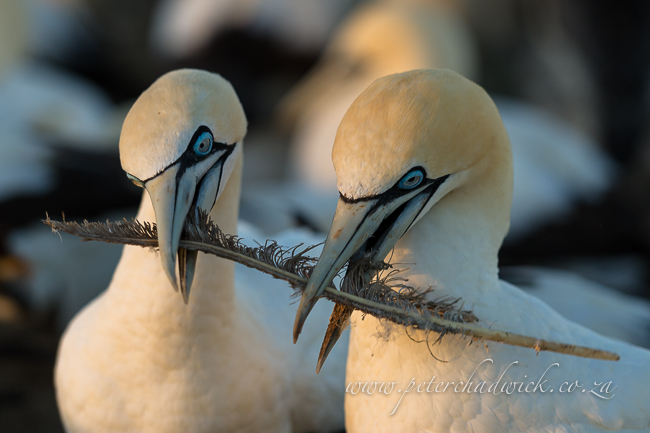 10. A discarded wing feather is passed between a pair of Cape Gannets in their pair-strengthening ritual. 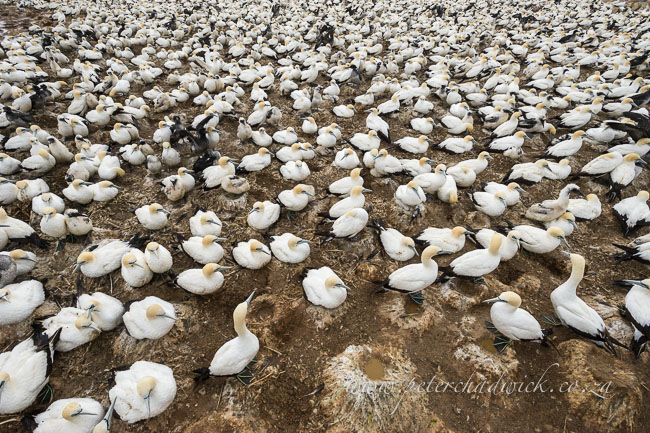 11. An empty nest site stands out against the rest of the colony where nests are evenly spaced and built from mud. 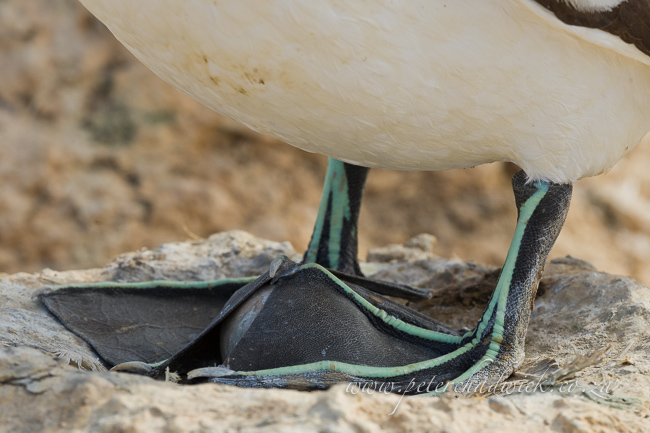 12. The Cape Gannet uses its large webbed feet to incubate the single egg.

13. A newly hatched Cape Gannet chick peers out at its new world as the parent sits protectively over it. 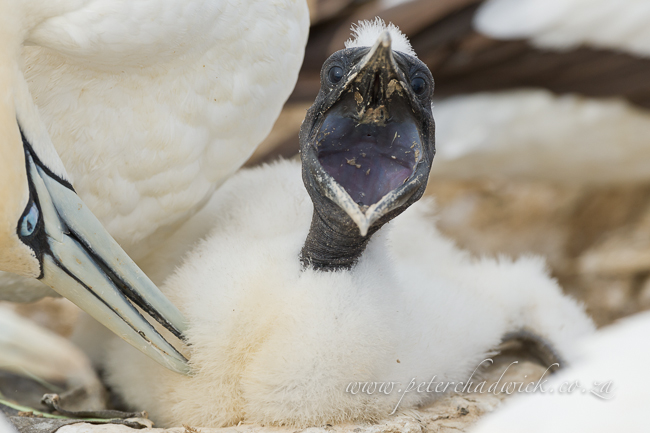 14. A downy Cape Gannet chick yawns widely as its is preened by its parent. 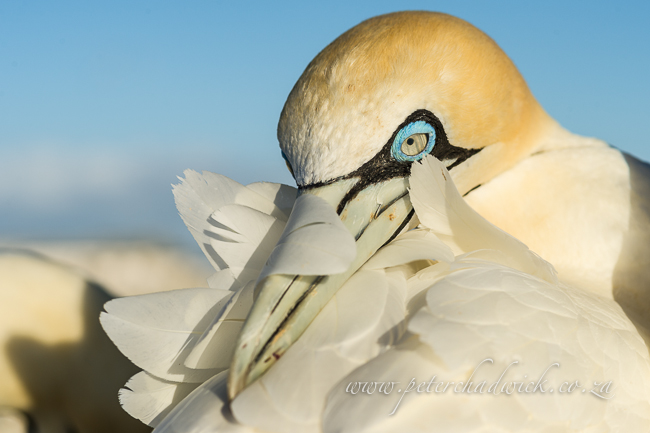 15. At the end of a long day spent feeding at sea, a Cape gannet rests its long bill across its back and starts to doze off as a light wind ruffles its feathers. 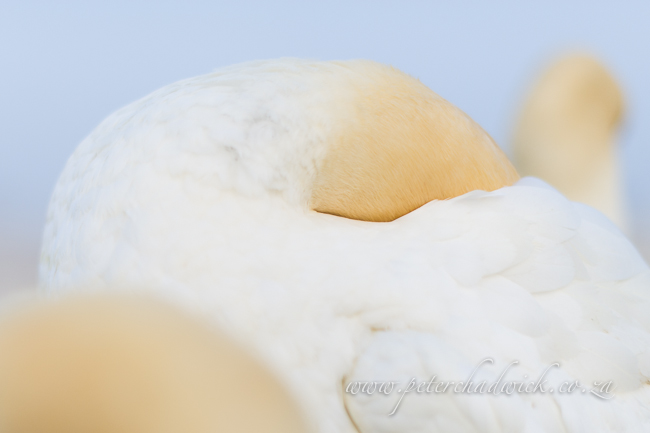 16. Cape Gannets rest with their pale orange heads tucked deep into the feathers on their backs. 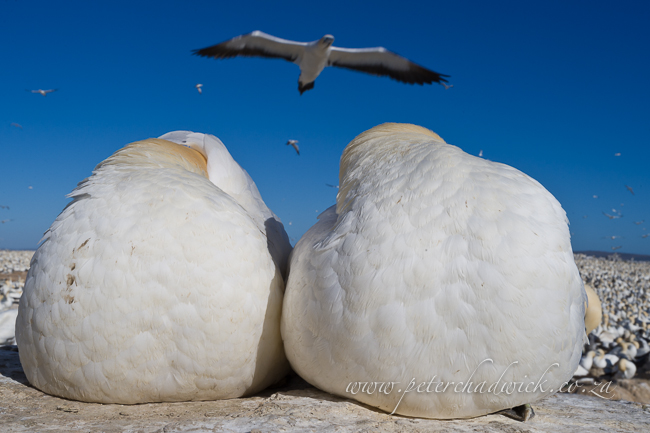 17. Two Cape Gannet bachelors sleep close to one another atop a large boulder as the rest of the colony busies itself around the sleeping pair. 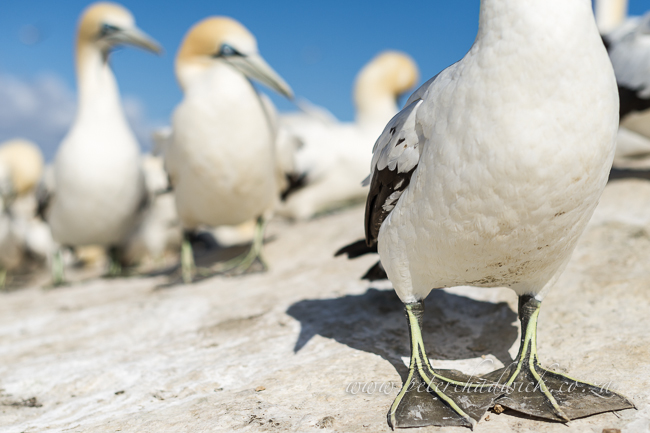 18. The large and distinctively marked webbed feet of a Cape Gannet.

19. Cape Gannets are extremely efficient flies and may cover as much as 450km in a single days foraging for food. 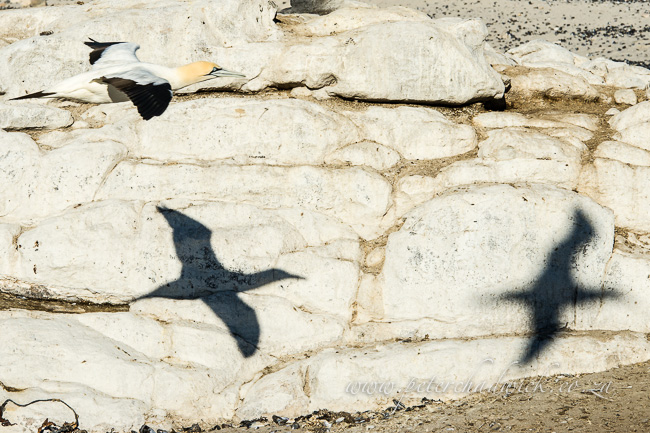 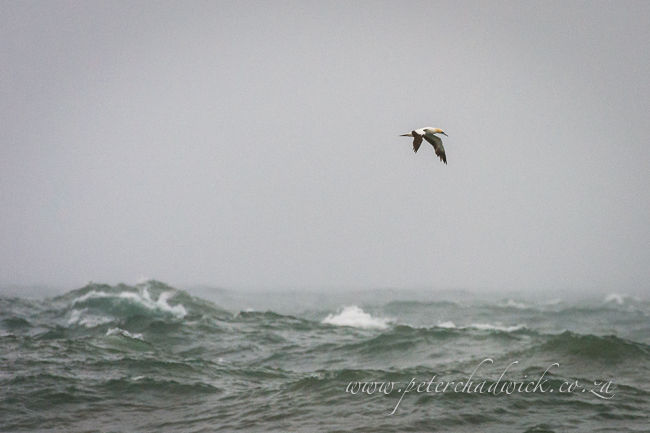 21. A lone Cape Gannet flies over stormy rough seas in search of prey. 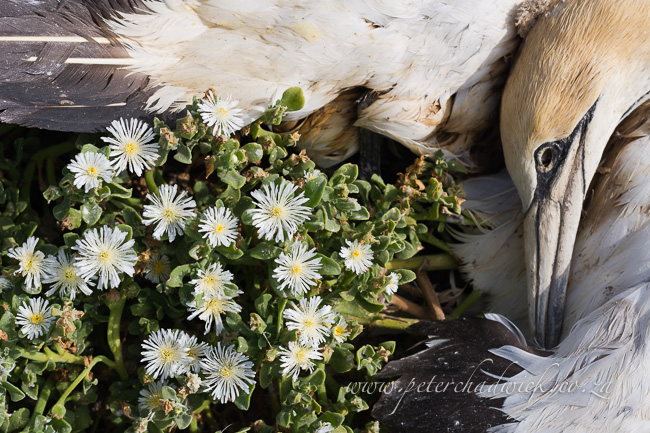 22. And as all things must, when they die, their bodies provide nutrients from which new life grows.

All images and text by wildlife and conservation photographer Peter Chadwick