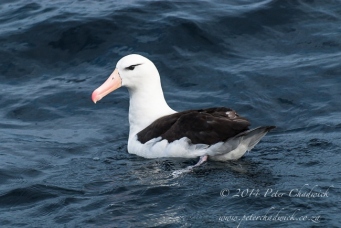 The small group of people, clad in weather proof clothing, stood huddled around in the darkness, listening to John Graham expertly give his briefing about what we could expect on the trip that lay ahead of us. My mind was running in fast-forward, keen to get onto the boat and head out to sea on this chilly early morning. It was 6h45 and we were gathered on the jetty at Simonstown harbour, about to embark on a day’s pelagic sea-birding way south off Cape Point in the rolling seas of the deep trawling grounds.

The “Zest II”, a 45ft motorised launch was to be our birding platform for the day and was ably skippered by Harry Dilliy who has years of experience out on the seas and who himself is a keen birder. My fellow birders for the day had come from far and wide and included Americans, Italians, Germans and South Africans from all over the country and who all hoped to add a number of “lifers” to their list of birds. 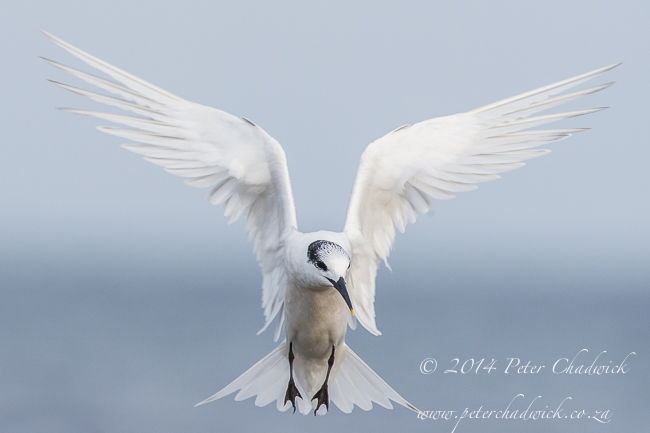 Pelagic birding is not just about trying to see a few new birds; it is a whole adventure that starts with climbing aboard a boat and heading into for us humans, an artificial environment way out to sea where land is no longer visible. It is about being able to feel the fresh sea air and smelling the salt spray as swells push over the front of the bow.  It is about scanning the entire horizon from where you have the feeling that you could be the only people on earth and then seeing an almost magical appearance of that first albatross as it glides effortlessly between the swells with barely a wing-beat. You immediately realise that you are in an extremely privileged position to be graced by the true avian masters of the deep oceans. As the powerful inboard engines thumped into life, we settled ourselves on the decks with binoculars and cameras at the ready. Leaving the harbour we passed the formidable form of “Ark Rock” rising out of the sea and covered in a few thousand Cape Cormorant and an occasional Crowned Cormorant. John called out excitedly as the first of the days “specials” a Bank Cormorant tucked in behind the boat, flying at perfect viewing speed and height. It was joined by a teenage gang of Kelp Gulls who hung overhead in the hope of picking up scraps from what they hoped was a fishing vessel. African Penguins swam in small hunting packs from the nearby Boulders Beach colony and headed out to sea to begin a days foraging. Further out in the bay towards Cape Point the first of the true pelagic birds appeared in the distance as Long-Tailed Jaeger press-ganged a Swift Tern that had just caught a fish. 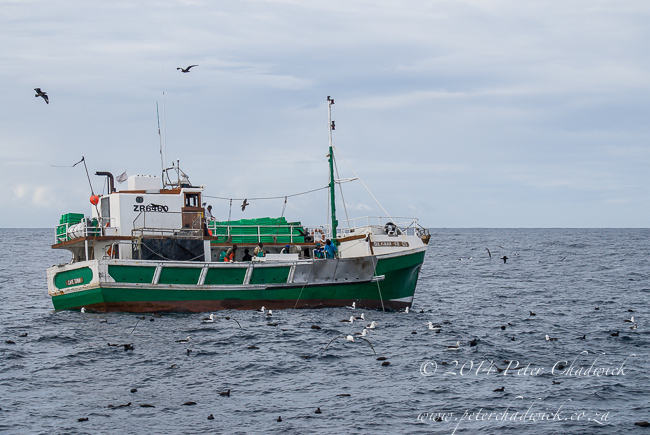 As Cape Point itself came into view, cameras started to click as we rounded one of the southern tips of Africa and instantly the calm protected waters of False Bay changed and sea-swells that emanated from deep in the Antarctic rolled in and began to rock the boat. Almost immediately Great Shearwaters began to appear together with Sooty Shearwater and at the blinder just south of the point where the water boiled, there must have been a shoal of bait-fish. Cape Fur Seals spun and twisted after the fish while Cape Gannets flying overhead folded their wings and dove like arrows into the mêlée. Swift Terns were also present and were constantly hassled by pirating Subantarctic Skuas who found it far easier to bully the terns into relinquishing their catch than getting their own fish. 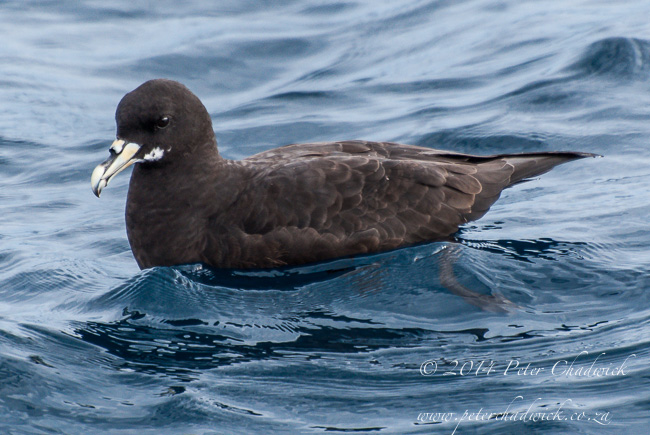 An excited yell from one of the group turned everyone’s attention to the starboard side of the boat as a small family pod of three Humpbacked Whales announced themselves by simultaneously breeching. We stopped the engines for a while and watched this amazing spectacle until the whales dove deep and disappeared from view. White-Chinned Petrels followed in the wake caused by the whales, hoping to pick up prey items and bits of old skin that had been dislodged from the whales. 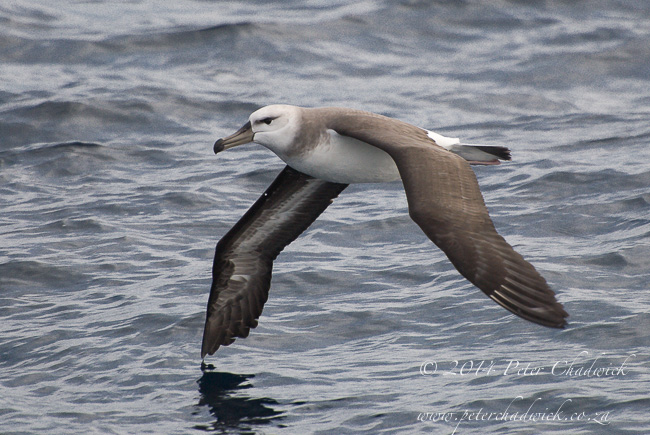 As we headed further south, Cape Point became smaller and smaller as we aimed for the pelagic trawling grounds. We hoped to try and locate a fishing trawler that was pulling up its nets, as it was here that vast numbers of birds would congregate to gather food scraps. The seas became angrier and the swells became deeper as we entered the edge of an approaching cold front and tried to doge rain-squalls. An occasional Cory’s Shearwater began to appear amongst the increasing numbers of seabirds and the first albatross of the day caused much excitement with everyone trying to balance their binoculars and themselves on the rolling boat. 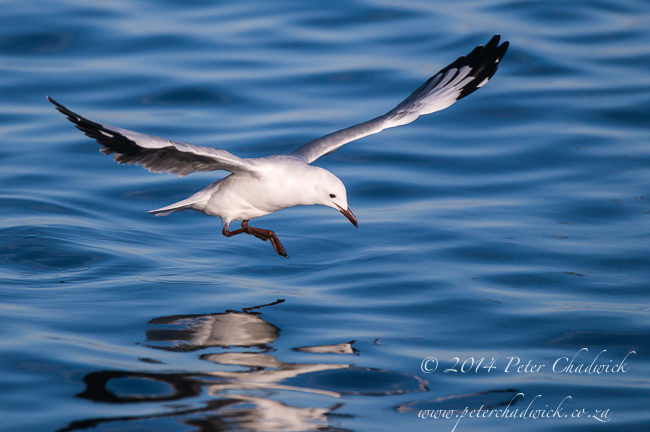 We passed distant pods of dolphins and the odd sleeping seal and eventually Harry announced that he had picked up a trawler on the radar system. En-route we chugged past a couple of longlining vessels pulling in their lines but continued after the main prize with the hake trawler soon appearing into view. It was also announced by thousands of seabirds flying in from every direction towards it. We tucked in behind the ship and I was pleased to see that it was trailing bright orange tori-lines, which scarred all the birds away from the dangerous rear of the ship. Albatross and petrels of many species have all declined in numbers with many of them now becoming endangered. Thousands have been killed as they get caught in the trawling nets or drown as they get hooked on the bait set on the longlines. South Africa has become a leader in ensuring mitigation measures are put in place on these fishing vessels so that birds do not get caught and the tori-lines are just one example of these mitigation measures. 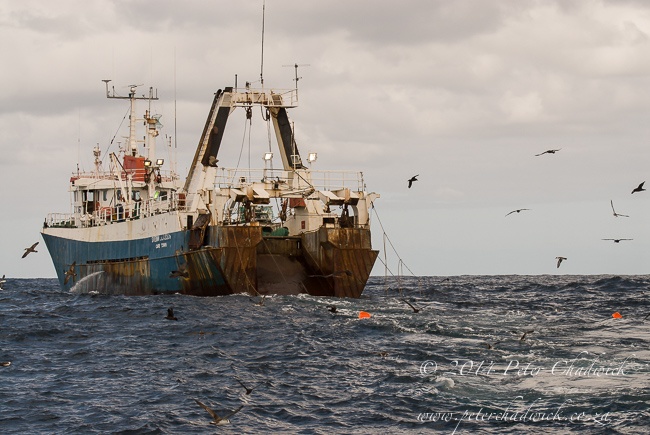 7 of 9: Hake Trawler with Tori-Lines.

John and Trevor Hardaker, our guides for the day, now became extremely busy as they helped with the identification of the flying mass in front of us. Shy Albatross, Black-Browed Albatross, Atlantic Yellow-Nosed Albatross, White-Chinned Petrel, Sooty Shearwater and Great Shearwater were rattled off in quick succession and it was difficult to know where to start looking at the amazing spectacle before us. Birds landed, took off, dove and squabbled in front of us, often right alongside the boat allowing us excellent viewing. A small flock of beautifully patterned Sabine’s Gulls hung on the edge of the frenzy, while European and Wilson’s Stormpetrels, which are no bigger than your hand, danced on the surface collecting minute scraps. An immature Indian Yellow-Nosed Albatross graced us fleetingly and someone also glimpsed a distant Wandering Albatross. Seals and the occasional Blue Shark swam amongst the scraps, causing the birds sitting on the sea to leap in sideways dodges. I realised after a while that my breathing and heart rate had accelerated rapidly and this was just from the sheer excitement of taking in all that lay before me. Parasitic Jaeger and Arctic Terns were also added to the list before we begrudgingly had to start turning back for home. 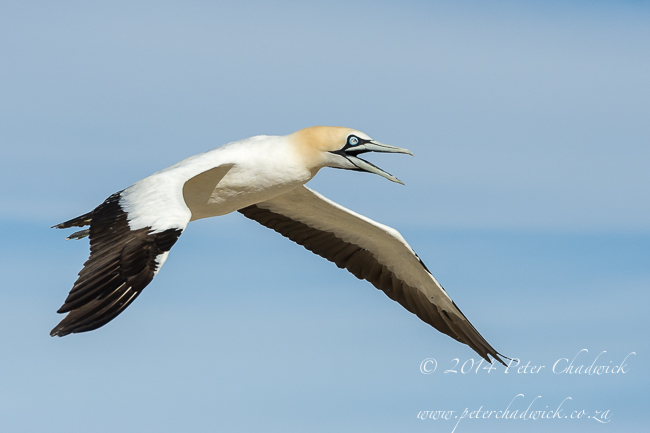 The return trip was spent in reflection and as a birder of many years I realized that this was certainly one of my most memorable experiences and should be added to anyone’s list of must do’s! Albatross and Shearwaters flew in the wake of the boat almost escorting us back to Cape Point and at a point where land was still not visible, a lone bull Sperm Whale surfaced briefly before diving deep again. Although there are not a vast list of species that are seen on these pelagic trips every species is a “special” and it is the vast numbers and sheer different birding experience that will definitely attract me back again and again. 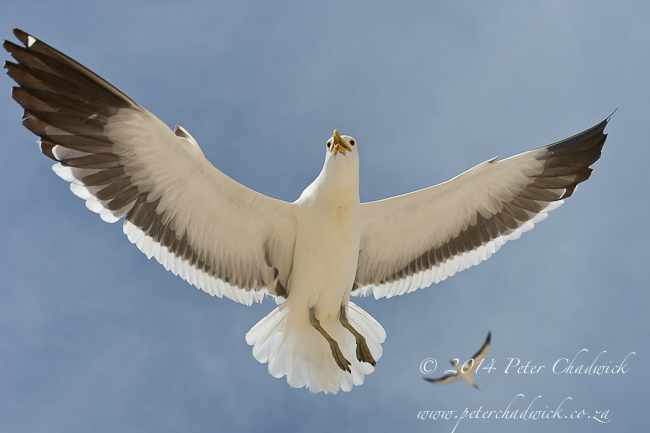 Season and weather: The sea is an unpredictable environment and conditions can change rapidly from calm flat seas to rough conditions with large swells. Winter and summer species vary considerably and the ideal would be to undertake a summer and winter trip to be able to see the majority of regularly seen pelagic seabirds. September is generally one of the best months as this is where a mix of winter and summer species can be seen.

Habitats: Open Ocean off the pelagic fishing grounds. The trip from Simonstown also passes through False Bay giving opportunities to view some of the rocky outcrops rising from the sea

Specials: For the average birder the pelagic environment is a full of exciting specials comprising Albatross, Petrels, Shearwaters, Stormpetrels, Gulls, Terns and Skuas. Most birders are able to add several “lifers” on a pelagic trip. In addition, dolphins, whales and sharks of various species are often observed.

Pelagic Tips: Due to often rapidly changing conditions it is always important to bring weatherproof clothing as well as a good hat and sunscreen. Sunglasses are also advisable to keep off the constant glare. Sea-sick tablets and plenty of water are suggested. Cameras and binoculars must be kept on straps and a plastic covering of sorts is useful for keeping salt spray off them. If photographing, a zoom lens is the most useful and should be set at a high speed so as to compensate for the rolling boat and seas and to capture the movement of the birds. Image-stabilizing lenses are especially worthwhile.

Getting There: Bookings must be made well in advance and full information is provided once the booking has been made. The boat departs from the Simonstown harbor jetty, although trips from other locations are also offered.