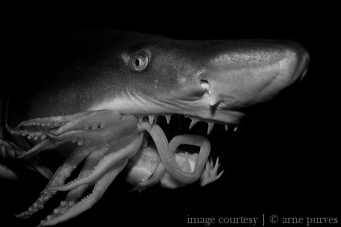 The Two Oceans Aquarium must rank as one of Cape Towns top attractions. It is a world class aquarium and provides a way for non-underwater photographers to get some stunning "underwater" shots. With patience and practice you can master the technique of photographing at the aquarium.

The southern tip of the African continent is the meeting place of two mighty and bountiful oceans, the Indian and the Atlantic. The Two Oceans Aquarium on the V&A Waterfront, Cape Town is ideally positioned to showcase the incredible diversity of marine life found in these two oceans. The Aquarium is one of the top tourist attractions in Cape Town and over 3000 living sea animals, including sharks, fishes, turtles and penguins can be seen in this spectacular underwater nature reserve.

Feeding times in the various exhibits are a great time to see some of the species in action. Check the aquarium websites for more info and opening times etc.

Best Time to Photograph
Visit the Aquarium when it is quiet and/or out of season. Otherwise anytime and deal with the crowds.
Type of Photography
Best Time of Year
All year round
Photographic Tips
A flash is required for photography inside the aquarium. Try using a difuser to provide a softer light. Either place your lens directly up on the tank glass or try shooting at an oblique angle. Keep an eye out for the flash reflection off the aquarium glass.
Recommended Gear
Flash and wide angle lens. Flash diffuser.

Closest Town
Cape Town
Getting There
The Two Oceans Aquarium is situated at the VA Waterfront in Cape Town.
Address
Cape Town