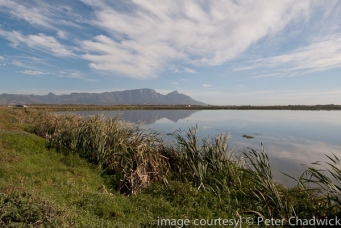 Baden-Powel drive is one of the many roads that runs along the spectacular False Bay coastline and links various parts of the Cape Town metropole to one another. The road which runs right next to the sandy beach front and crashing waves will often produce views of Cape Cormorants flying in their characteristic V-shaped skeins as well as endangered African Black Oystercatcher foraging amongst the kelp debris together with White-Fronted Plovers. Large huddles of Kelp Gulls that hunker down from the well known Cape doctor in the form of the South-Easter wind are also a regular sight.

What most people do not realise is that just behind the dunes on the inland side of this road lies one of the best birding locations in the entire Cape Peninsula and on hearing the name of this location will be both surprised and also perhaps slightly shocked with a subconscious turning up of the nose. Strandfontein Sewage Works can produce more than 80 species in a single morning and is an ideal destination for both beginner birdwatchers and serious twitchers to test their birding skills from the comfort of their vehicles. The sewage works comprises numerous filtration ponds surrounded by reed beds that attract huge numbers of waterfowl. The road ways between the ponds are verged by lush grasses, shrubs and coastal thicket that also attract a fair share of fynbos specials.

Best Time to Photograph
Arriving as the sun rises provides the best photographic opportunities as birds become active and many species start moving between pans to feed.
Type of Photography
Birds
Best Time of Year
Throughout the year
Photographic Tips
Birds can be extremely shy, so patience is required. Sitting quietly at a suitable spot will often allow the birds to relax and return to their original locations. Roosting beaches on the pans edges are good locations for waiting.

Recommended Gear
Long-lenses are must for bird photography and it is advisable to have a good window-mount or beanbag in place on open windows at all time. Spotting scopes and good binoculars are also recommended as many rare and uncommon species have been recorded from this location.

Site Highlights
Moving through all the pans is necessary as varying depths provides for different bird species using the pans.

Season and Weather
Summers are warm often with South-Easter winds blowing in from the sea. Winters are cool and light rain can often be expected.

Closest Town
Cape Town
Getting There
To enter the Sewage Works from the False Bay side follow the R310 along Baden Powel Drive. Turn inland at the Strandfontein T-Junction (M17) and follow this road for approximately 4 kilometers. The turn-off to Zeekoeivlei and the sewage works is poorly marked amongst a stand of blue gum trees. Follow this road to the entrance of the works.