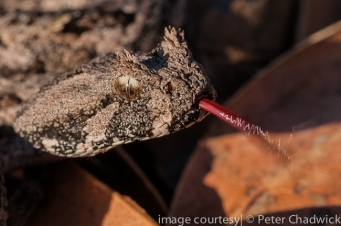 Ever since the time when Adam bit into the infamous apple, reptiles have caused a shiver down people’s spine and our inborn reaction is to scream and run, or on occasion, worse for the reptile, pick up a blunt object and beat it into oblivion. Reptiles however play a vital role in the environment and if one takes the time to study them, they are generally shy but fascinating creatures.

Southern Africa has a incredible diversity of reptile fauna with a minimum of 517 species that have so far been described. These include 151 snakes, 338 lizards, 27 tortoises and one crocodile. Many more species are still awaiting description in the scientific literature. Sadly, many of these reptiles have largely been ignored in conservation management plans and require special attention in the future. 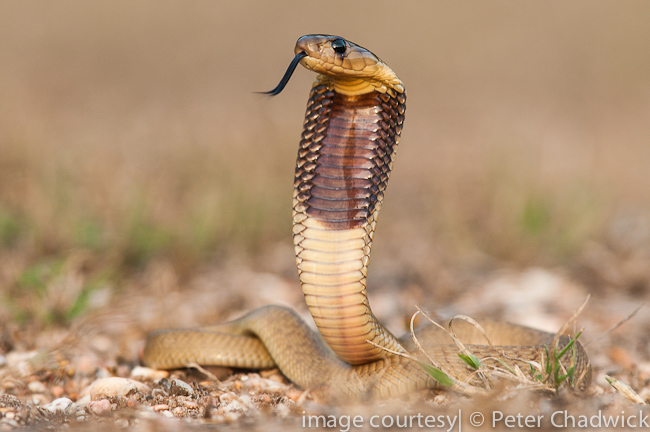 This juvenile Cape Cobra was basking in the warm evening light, which radiated off its recently shed skin. It reared its hood in a defensive pose and reversed backwards into a bush rapidly trying to escape. 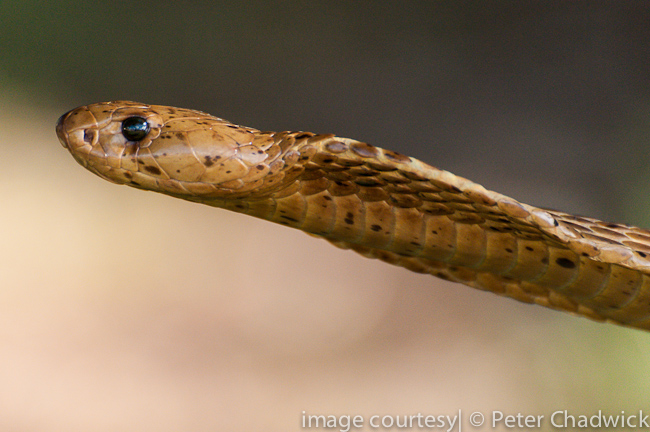 Cape Cobras are a highly adaptive species that can be found in a variety of habitats including low density towns and villages. Their coloration is extremely variable from a golden yellow through to a dark chocolate brown with speckled varieties also occuring. They are highly intelligent snakes, maintaining a territory for many years. 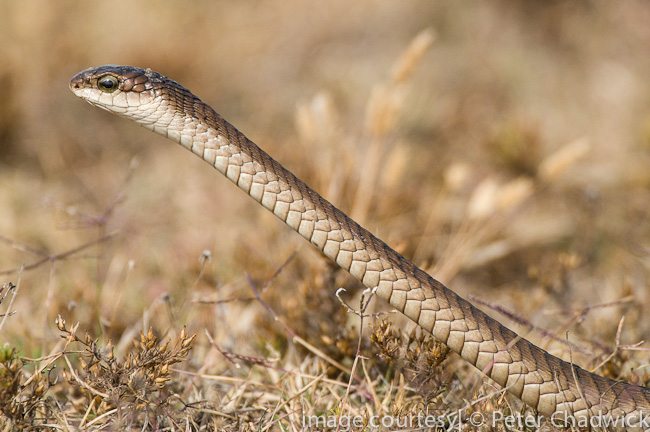 The Boomslang has well-developed binocular vision that allows the snake to see directly forward to detect predators and prey. They are generally an aboreal species that seldom descends to the ground. 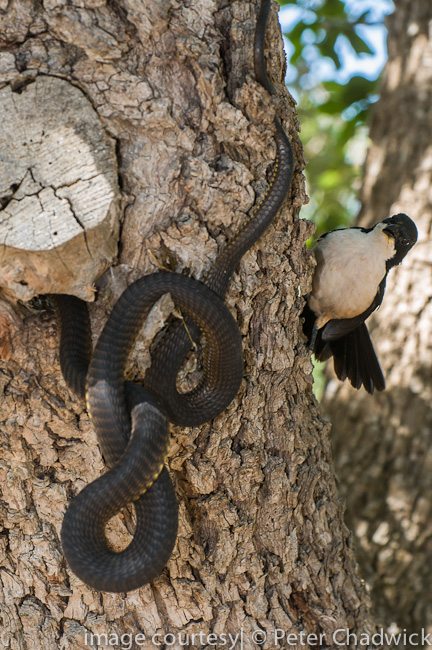 The diet of the Boomslang is extremely varied and includes tree living reptiles such as Chameleons and small mammals and birds. Due to their habit of raiding birds nests, the Boomslang is often mobbed by small birds that will on occasion strike the snake. 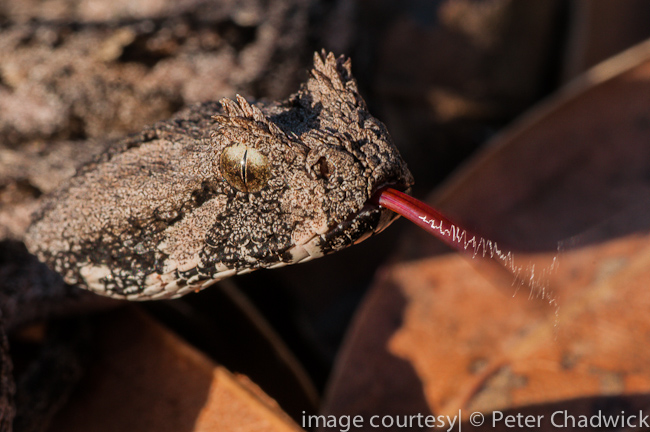 Snakes, such as this Southern Adder use their forked tongues to pick up particles in the air, which are then deposited onto the Jacobson organs, which act in the same manner as our sense of smell. The forked tongue helps determine the direction of the smell. 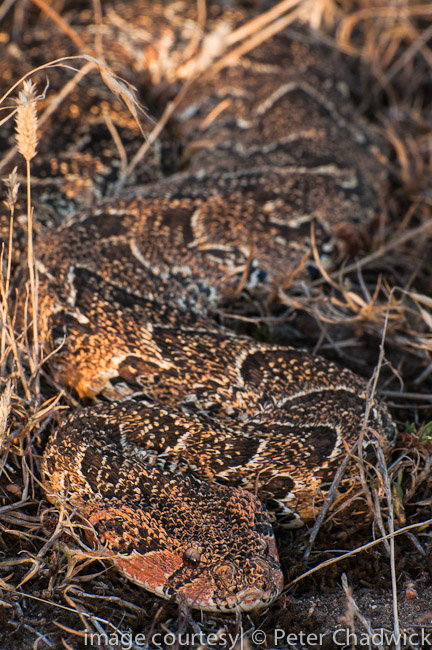 The Puff Adder is one of the most wide-spread snakes in South Africa and can attain an adult length of just under one meter. It is a slow moving snake that relies on its camouflage to avoid detection and ambush prey. 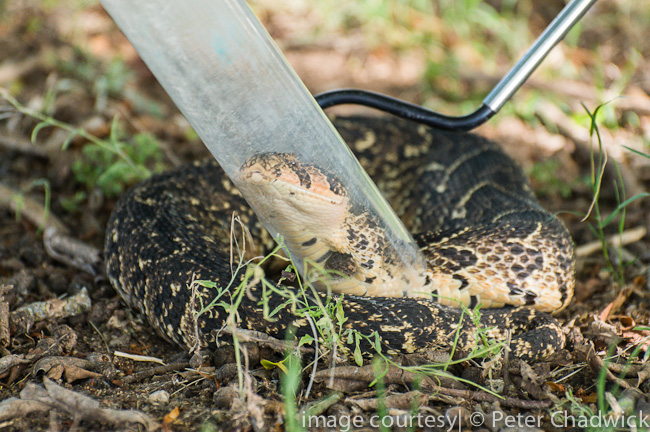 The Puff Adder is responsible for more cases of serious snakebites in South Africa than any other. The venom is cytotoxic, causing extreme pain. Handlers use plastic tubing and a snake stick to carefully capture and handle Puff Adders. 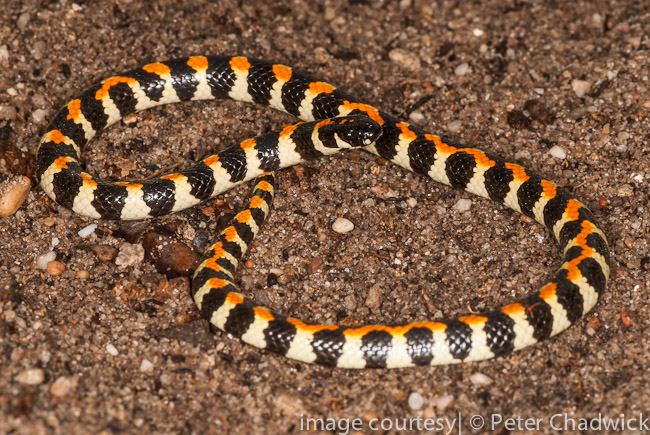 Despite the bright warning colours of the Spotted Harlequin Snake it is a docile snake, which rarely bites. They largely forage underground in tunnels and cracks, feeding on other burrowing reptiles. 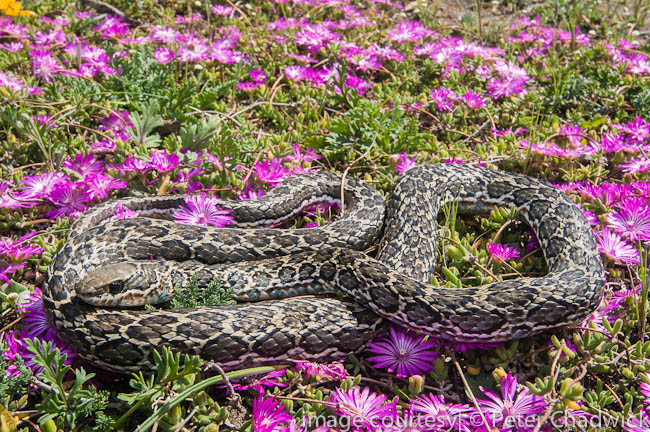 The Spotted Skaapsteker is a diurnal hunter that uses speed and good eyesight to capture its prey which varies from small rodents, small reptiles and nestling birds. Their name is misleading as their venom is only mildly toxic. 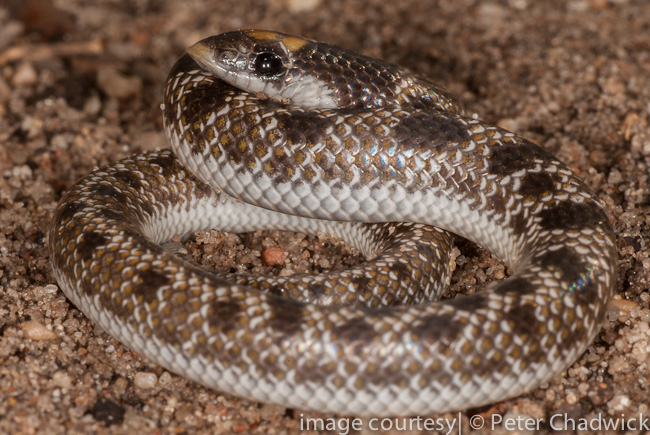 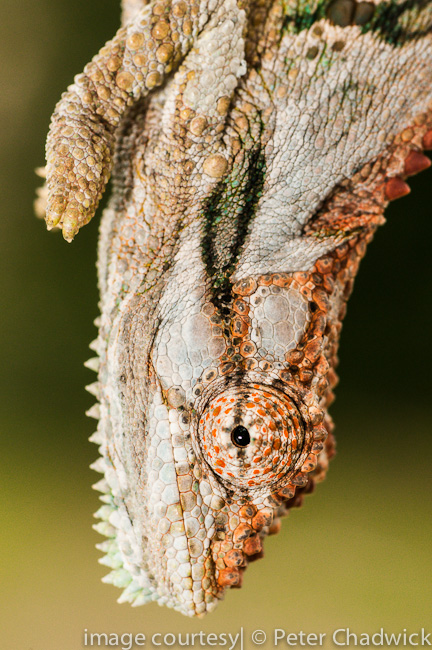 The Robertsons Dwarf Chameleon is one of 15 currently described species of Dwarf Chameleon and adults are small  ranging between 4,5 and 10cm in length. Dwarf Chameleons are heliothermic using the suns rays to raise their body temperature and climb into exposed positions in the mornings to bask. 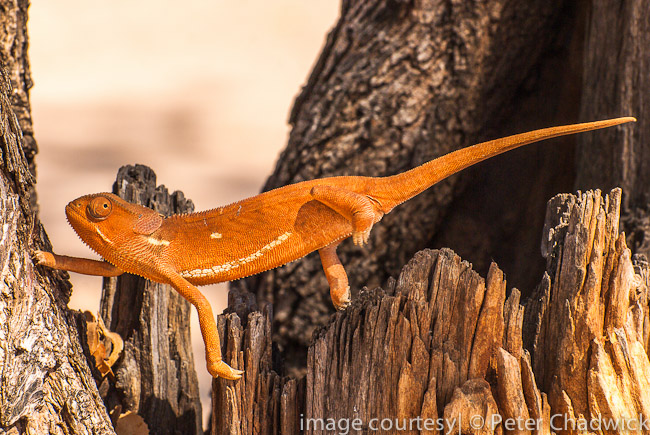 Chameleons eyes can scan almost 180 degrees and can be moved in different directions simultaneously. Their vision is more acute that that of humans 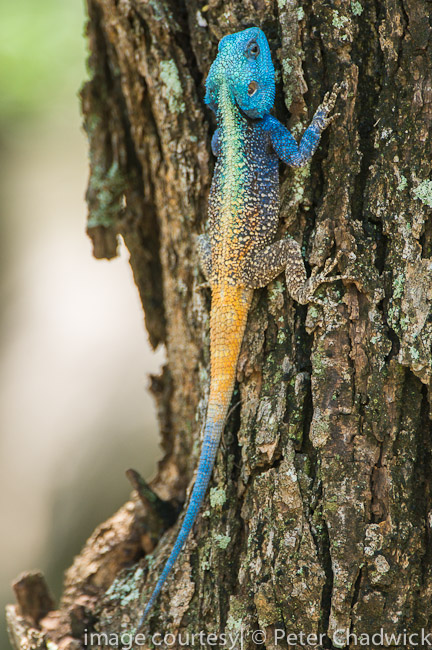 The male Southern Tree Agama is brightly colored to both attract females and warn other males of their dominance status. They form family groups that are centered around clusters of trees. They avoid danger by moving rapidly around the tree trunk and fleeing into the upper branches. 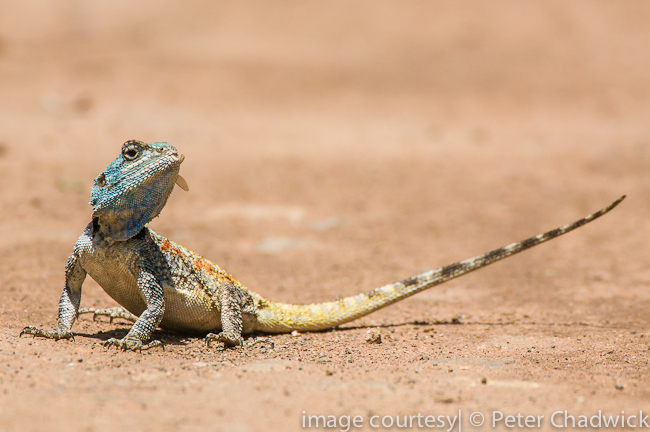 Southern Tree Agamas are unusual in that they feed almost entirely on ants and termites.

The Bibrons Gecko is a nocturnal species with large eyes and vertical pupils to improve vision in the dark. During the day they hide in rock crevices or under bark. 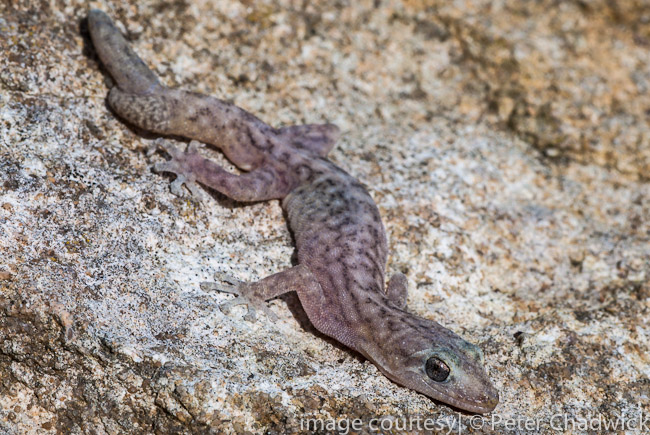 Marbled Leaf-Toed Geckos gain their name from the enlarged leaf-like pads on each digit. In this image the gecko has at some point shed its tail to flee from a predator. The tail is now growing back with a rare "double fork" 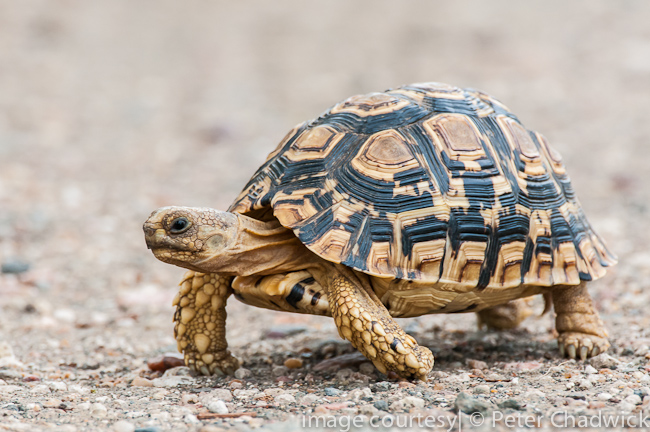 The Leopard Tortoise is the largest species to be found in southern Africa and may weigh as much as 12kgs. Their home ranges may exceed 80 hectares 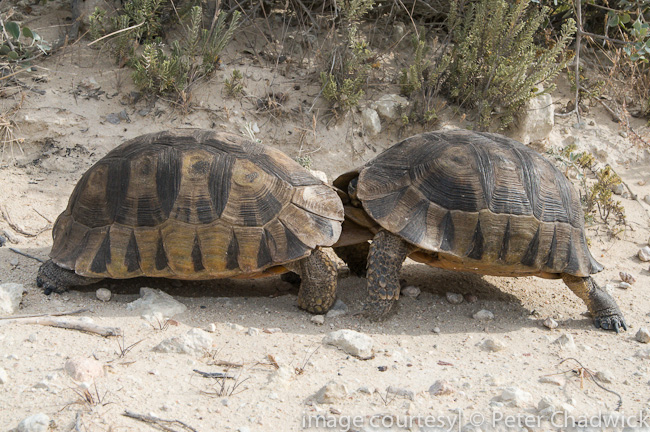 During the breeding season between September and April, male Angulate Tortoises use their enlarged gular shields in intensive battle with other males and try and use the gular shields as levers to overturn and ram their rivals. 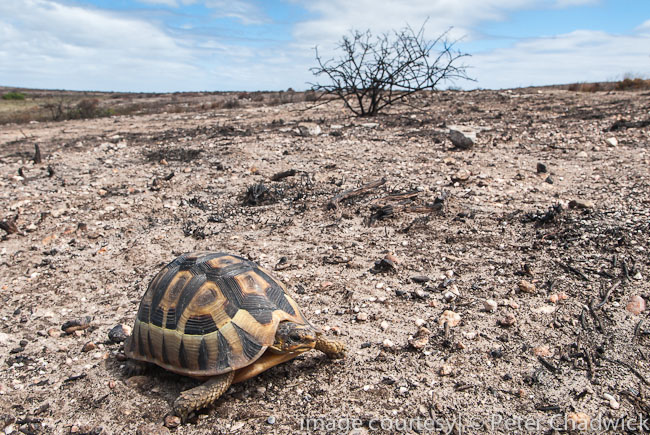 The Angulate Tortoise which is found in Fynbos habitat is extremely vulnerable to fire with many individuals burning to death if they cannot find shelter quickly enough. It can live in very high densities of up to 15 individuals per hectare 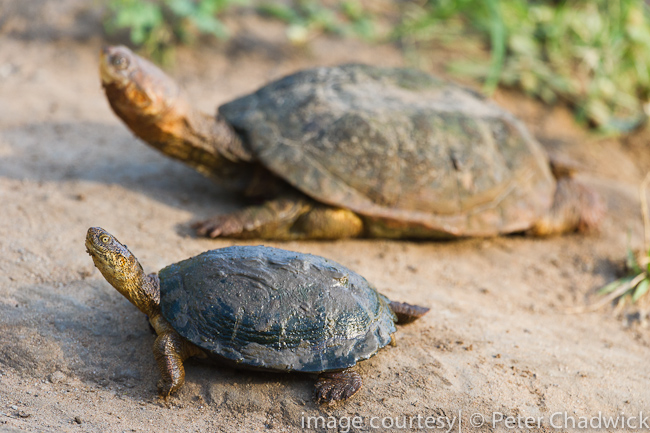 Marsh Terrapins are highly adaptable and during dry periods will bury themselves into the mud and aestivate in a torpid state until rain once again falls. In the Kalahari, rain may only fall every few years and it is an incredible site to see the terrapins again emerging after such long periods of time.