African Skimmers protecting their nest at all costs. Hot 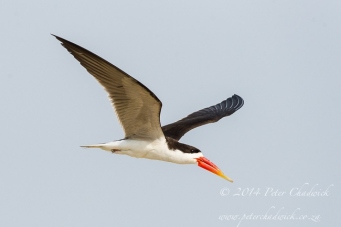 The global population of the African Skimmer is around 10 000 birds with only 1000 of these occurring in southern Africa where it faces human induced threats and it’s conservation status is considered as near-threatened.  It is dependent on large healthy rivers and lake systems with exposed sandbanks where it roosts and breeds and the Chobe and Zambezi Rivers are breeding strongholds for this species in southern Africa. Adult birds will go to extreme lengths to protect their nest and chicks.

During a recent photographic trip with Pangolin Safaris on the Chobe River and over a period of a few days, the African Skimmers were popular photographic subjects. We made repeated visits to the one breeding colony that was nesting on a large sandbank in the middle of the river and which was also a popular grazing area for large game. Being careful to keep our distance from the nesting birds, we observed several interactions where the adults vigorously mobbed herds of African Elephant and Cape Buffalo that approached too close to the nest.

When a large animal approached the nest, the adults would first alarm call loudly and this was followed by one of the adults flying up, flopping down nearby and then pretending to have a broken wing. While this show might have worked to draw a predator away, the large herbivores were unimpressed and continued on their path. This is where it got interesting as the adult birds then flew up and aggressively mobbed either the elephant or buffalo, often striking the animals hard near the animal’s head. This brave action invariably startled the buffalo or elephant that then turned away from the nest, leaving it safe from trampling.

Sadly, on our last morning, we drifted past the colony only to find that a small flock of Marabou Storks had found the four or five skimmer nests and had swallowed all of the eggs and small chicks. The skimmers were obviously highly agitated and spent at least a half-hour vigorously mobbing the storks that eventually flew off. This single action by the Marabous destroyed an annual breeding attempt by the skimmers who would have to wait until the following season to breed again. 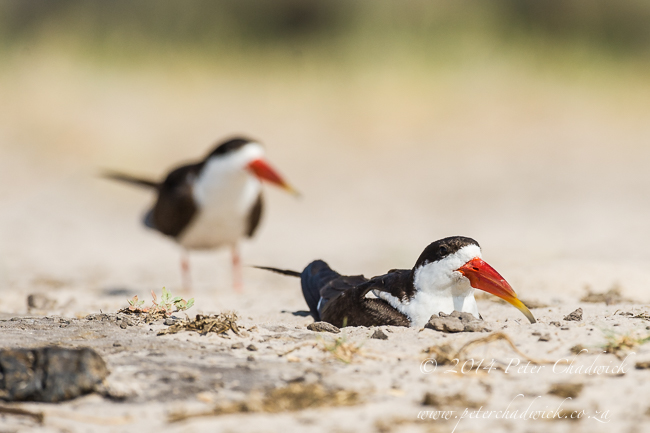 1 of 11: An adult African Skimmer incubates on its nest as the other adult stands close by. 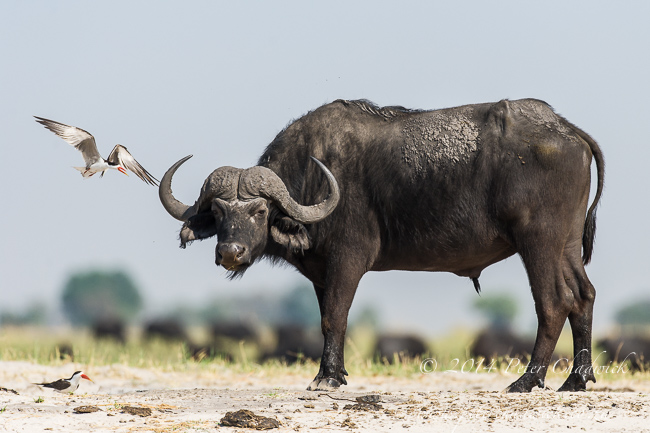 2 of 11: An African Skimmer pair protect their nest from a Cape Buffalo that is approaching too close. 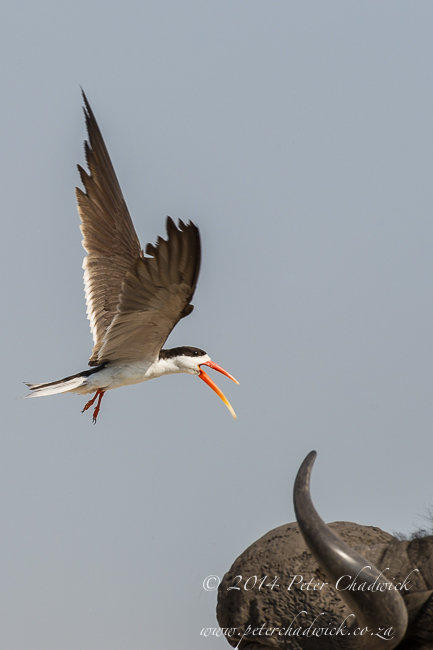 3 of 11: An agressive African Skimmer calls loudly in alarm and strikes at the head of a Cape Buffalo. 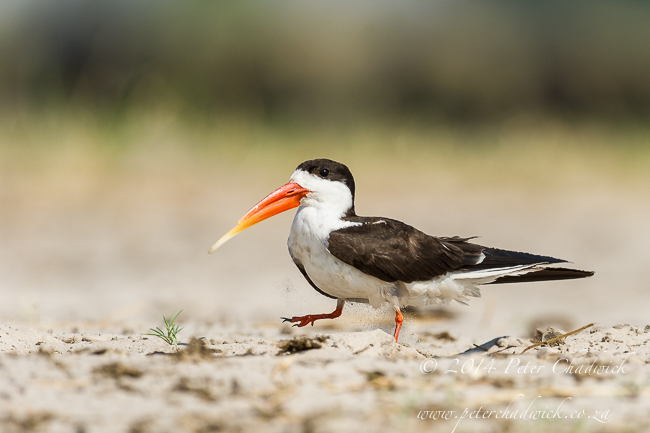 4 of 11: A highly agitated African Skimmer runs on the ground to try and attract the attention of a Cape Buffalo that is too close to the skimmers nest. 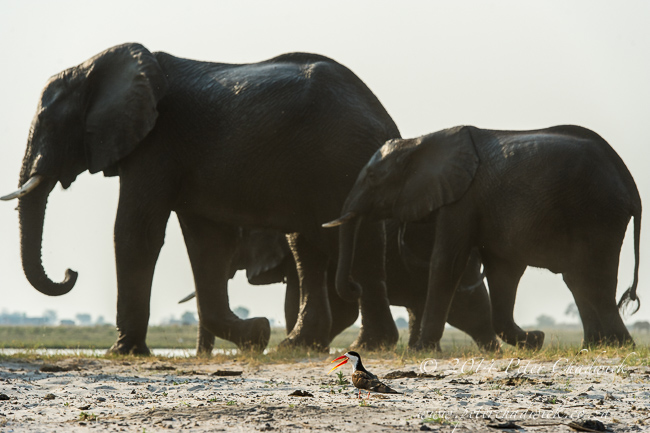 5 of 11: An African Skimmer calls loudly in alarm at a passing herd of African Elephants. 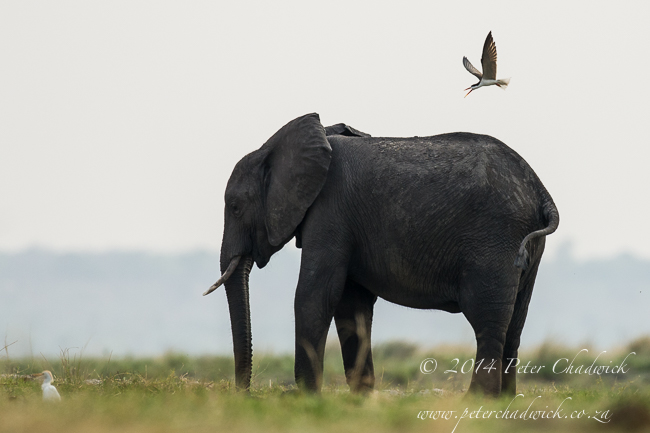 6 of 11: An African Skimmer mobs an African Elephant that is walking too close to the skimmers nest site. 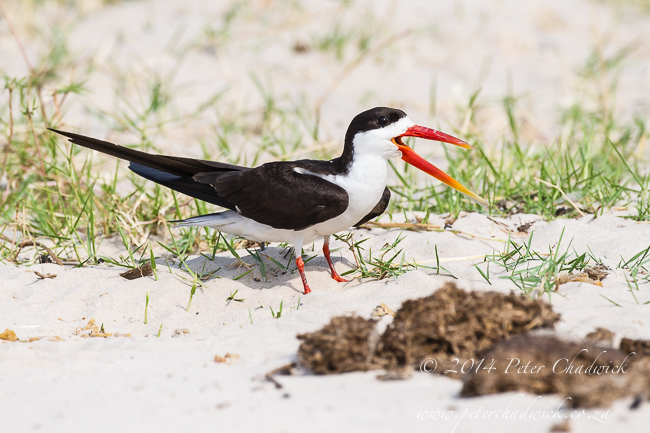 7 of 11: An African Skimmer first tries calling in alarm to attract the attention of a large animal that is too close to the skimmers nest. 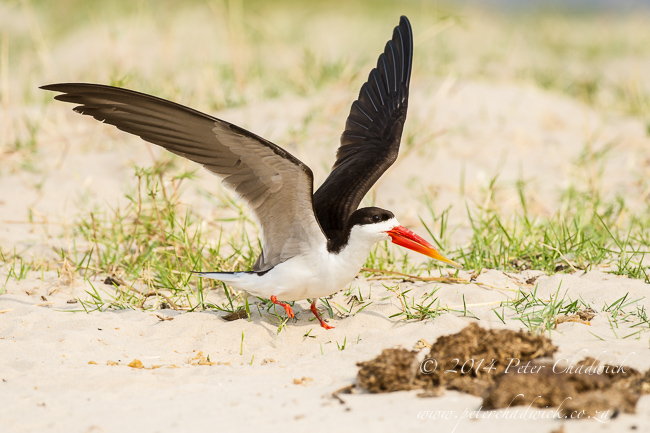 8 of 11: With the alarm calling being unsuccesful, the African Skimmer raises its wings and flaps around in the hope of drawing the approaching animal away from its nest. 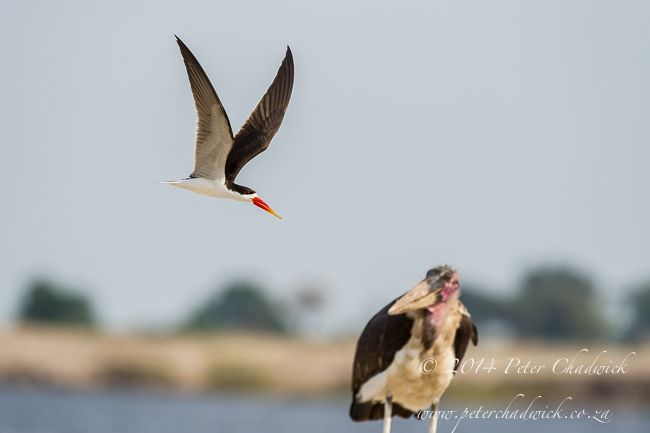 9 of 11: An African Skimmer flies aggressively towards a Marabou Stork that is raiding the skimmer nesting colony. 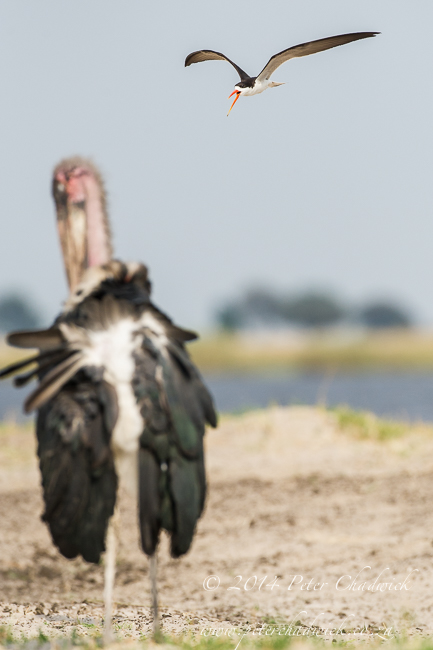 10 of 11: A Marabou Stork preens after feeding on the eggs and chicks of the African Skimmers, while the adult skimmers continue to mob the Marabou's. 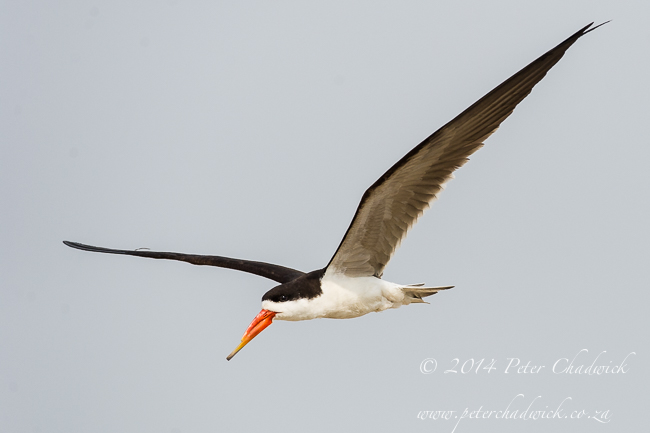 11 of 11: An African Skimmer in flight showing the elongated lower bill.